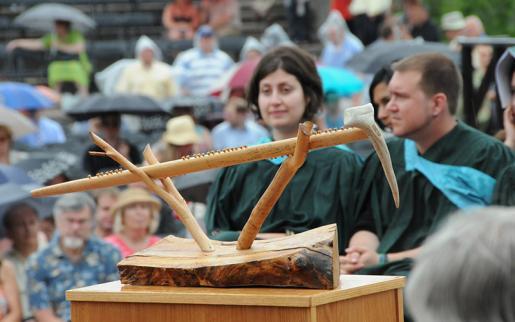 Each year at Trent University’s convocation ceremony, while members of the Trent community and their families look on, the Condolence Cane makes its annual appearance at the head of the faculty procession. A gift to the University from the Trent Aboriginal Education Council, this replica Cane was carved by the late Chief Jake Thomas of the Cayuga Nation, who was also a Trent Professor. It is a symbolic representation of the governance structure of the Haudenosaunee (People of the Longhouse).

For Trent, the Cane represents the academic governing power of the Senate, the interdependent nature of the University community, and the search for knowledge in the interests of justice, equality and peace. Traditionally, the Condolence Cane is used by the Haudenosaunee as a mnemonic device depicting the “seating” arrangement and relationships of the Grand Council Confederacy Chiefs in the Nations and clans of the Six Nations. Each Chief’s title is represented by a peg and a pictograph depicting aspects of the title or the story of each title holder. The Peacemaker’s mission was to put an end to war and to create unity through bringing Good Minds together to work for peace. His efforts resulted in the founding of the Haudenosaunee Confederacy. The story of the Journey of the Peacemaker, with its many attendant teachings including the Condolence, is one of the foundational representations of The Great Law of Peace, the Constitution of the Haudenosaunee Confederacy.
Indigenous culture is of primary importance to Trent University and indeed has influenced many of its values and core academic strategies. Indigenous Studies at Trent began in 1974 as the Department of Indian and Eskimo Studies. It is the oldest discipline of its kind and has evolved into several new and unique academic programs, giving Trent a well-established reputation for excellence and innovation in the field Indigenous Studies. Trent’s innovative degree programs such as Indigenous Environmental Studies and the M.A. in Canadian Studies and Indigenous Studies are embedded in that legacy, drawing on faculty from the humanities, social sciences and other interdisciplinary fields. The richness that such diversity provides fosters the interdisciplinarity that lies at the heart of the programs.