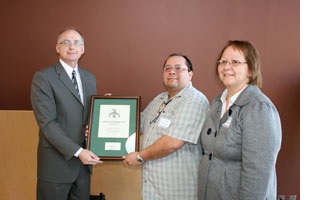 Respected Mohawk Elders Ernest and Florence Benedict were given a place of honour at Trent University as the Gathering Space in the First Peoples House of Learning was renamed the Benedict Gathering Place in a special naming ceremony today.

“This room is the centre of Indigenous student life here on campus,” said associate professor David Newhouse, who is chair of the Indigenous Studies Department at Trent. “It is appropriate that this space be named in honour of such great teachers.”

Lifelong residents of Akwesasne in traditional Mohawk territory, Ernest and Florence Benedict were honoured for the important role they both play in fostering a greater understanding and appreciation for Indigenous knowledge. Mr. Benedict has taught at various colleges and universities in Canada and the United States, including Trent where he was a visiting professor in the early 1970s. Mrs. Benedict is a renowned Mohawk basket maker, and is considered a master of this ancient art form. Her fine works of art are collected by museums and galleries across North America.

Accepting the honour on behalf of Mr. and Mrs. Benedict was their son and his wife, Daniel and Maureen Benedict. “We’re happy, honoured and thrilled,” explained Daniel, who travelled from Akwesasne to take part in the ceremony. Trent University vice president of administration, Don O’Leary, presented the family members with a special plaque announcing the new name of the room as the Benedict Gathering Space, “Ska’nikón:ra”, which translates from the Mohawk language into “gathering our minds together”.

Today’s event was also significant as it marked the beginning of the 40th anniversary year of Trent’s Indigenous Studies Department. Louise Garrow and Art Beaver, co-founding presidents of the Indigenous Studies Alumni Chapter, recognized the impressive contributions of their fellow alumni and the important role Trent provided their educational development.

“Many of us came from places where traditional knowledge was not respected, but Trent gave us a space where we heard the drum,” said Ms. Garrow. Mr. Beaver also conveyed his pride in the accomplishments of Trent’s Indigenous Studies alumni. “We are making a difference in this country, thankfully because of a place like this.”