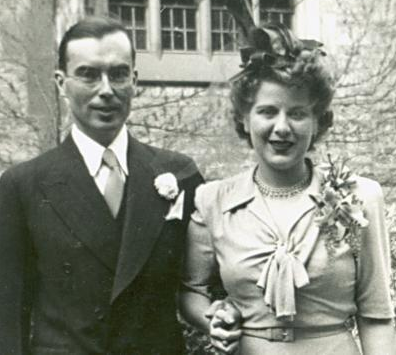 The Kenneth and Martha Kidd Lecture series is named for the first chair of Trent's Anthropology Department and his wife. Kenneth E. Kidd’s long progressional career is a record of exceptional accomplishment, innovation, and scholarship. He played an important role in the development of Canadian anthropology, especially archaeology and ethnography, during his 30 years at the Royal Ontario Museum, and then after his arrival at Trent in 1964. The list of his publications, positions held, awards received, and memberships, spans many pages over fifty years, and a remarkably wide range of academic interests. Kenneth E. Kidd’s death in 1994 marks the end of the era of the general anthropologist in Canada.

The Kidd’s partnership was a long and productive one; married in 1943, the pair shared a passion for archaeology, and the Indigenous history of the region. Martha was always an active participant in Kenneth's work, and also produced important work of her own such as her work in the classification of beads. After 1968, Martha Kidd's work focussed on regional history and over the years she became one of Peterborough’s foremost historians. Her interest in the preservation of local heritage led her to become co-founder and long-time member of both the Peterborough Architectural Conservation Advisory Committee (PACAC) and the Trent Valley Archives (TVA). Over the years, her preservation work and research led to two definitive publications, notably Historical Sketches of Peterborough, Broadview Press, 1988, and a 1978 book cataloguing Peterborough’s Architectural Heritage up to that time that has become a local classic. Three days before her death in 2013, Martha hosted the monthly board meeting of the TVA at her heritage home in East City, surrounded by friends and doing what she loved most. She was an active and passionate researcher, academic and community member to the very end. The Richard B. Johnston Memorial Lecture series was established at Trent University in 1993 to honour one of Canada’s most distinguished archaeologists and to bring leading scholars from around the world to share their visions of antiquity with the University and Peterborough communities. Dr. Richard B. Johnston came to Trent in 1971 and served as chair of the Department of Anthropology through its formative years, from 1975 to 1980. He supervised major archaeological research at the Serpent Mounds site on Rice Lake near Keene, the Le Caron Huron village site near Midland, and the Atherley Narrows site near Lake Simcoe, before returning to Rice Lake to excavate the early Archaic MacIntyre site. He was also heavily involved in the Anthropology graduate program at Trent, where he supervised many students who have gone on to successful careers in archaeology. Prof. Johnston died in 1987 at the age of 56.

This lecture series was founded in 2010 in order to provide the same experience to the Oshawa community and Trent Durham as the free lecture series based in Peterborough.

The POAS has a monthly Speakers Series from September to June, which is open to the public at no charge, and conducted with the support of the City of Peterborough and the Trent University Archaeological Research Centre. Light refreshments will be served. For further information contact Dirk Verhulst, chapter secretary at dverhulst@cogeco.ca.