Michael Thonet (1796-1871) one of Trent’s oldest designers, was the first designer to bend wood using steam, and provided was the first examples of a machine-created product. Thonet is German-born, originally undertaking the painstaking job of carving beech wood into furniture. Once he discovered how to bend wood, the Austrian government begged him to relocate to Vienna to continue his work. Once he settled down there, he received the first furniture contract from the Austrian government. He is considered the first person in Europe to bend wood of any kind to create furniture.

The chairs purchased by Trent are of Thonet design, but were produced by his descendents in the company that is now still active, five generations later. The chairs Thonet created were elegant, sturdy and lightweight. The Prague chair is seen as the typical “Bata Library Chair” and are seen by the students to be in infinite supply as originally Trent purchased so many. These chairs were designed by architect Josef Hoffman at the Thonet company, 50 years after Thonet’s death. 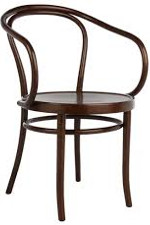