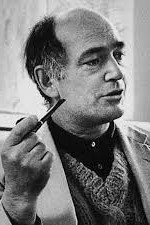 Harry Bertoia (1915-1978) made his mark in the modernist furniture movement of the 1960s by creating wire-basket like chairs with springy feet, a stark contrast to the straight lines and wood creations of his modernist counterparts. As a classmate of Charles Eames and a student of Eero Saarinen at the Cranbrook Academy of Art in Michigan, Bertoia felt trapped by many people doing similar work, so he moved to Pennsylvania to work with Knoll Manufacturing, who allowed him full credit for his designs, and distributed his original work to interested buyers. The Diamond chair was originally purchased for the Rubidge hall Junior Common Room, nicknamed “the Crypt”. When Rubidge Hall was sold and the environmental science complex was created on the Otonabee East Bank, there was a study room named “the Crypt” in honour of this original space.