Arne Jacobsen was a Danish architect and designer, famous for his chairs “the Swan” and “the Egg”. He fled from Denmark to Sweden during WWII, and studied under designer Alvar Aalto. As a designer with an incredible work ethic, he has produced lines of textiles, furniture, buildings, silverware, and even visual art. The driving force behind his design was in line with Thom’s – a way of thinking that focused on the broader picture, the universal design of how each medium fit together as part of a coherent whole. It was through this thinking that he could produce immense quantities of furniture from his small studio, while not compromising quality or creativity. To Jacobsen, no detail was too trivial, which is why he has been called a “perfectionist modernist”, while embracing Thom’s style of universal design. Jacobsen’s main distributor, Fritz Hansen, still produces many pieces of furniture today, however the iconic pieces range from just over $1,000 to over $10,000 per piece. The Series 7 chair was a favourite for faculty who visited Thom in Toronto to assist in choosing furniture for Trent. It was seen as lightweight, durable, stackable and fit with the modernist aesthetic of the Science Complex 137 room (nicknamed “the Bunker” by students) The Ant Chair, inspired by one of  Charles Eames’ designs, has two simple elements: three strong, tubular legs, and one continuous piece of plywood cut in such a way that the chair could fit easily in tight spaces. It came in a variety of vibrant 60’s colours, and has sold millions of copies. 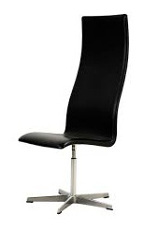 Designed by Jacobsen for St. Catharine’s College at Oxford, these chairs were originally purchased for the A.J.M. Smith Room in the Administrative department of the Bata Library. They were tan oxhide and provided ergonomically correct back support with a natural spinal curvature. They mysteriously disappeared in 2002, in favour of padded, cheap IKEA-style office chairs.