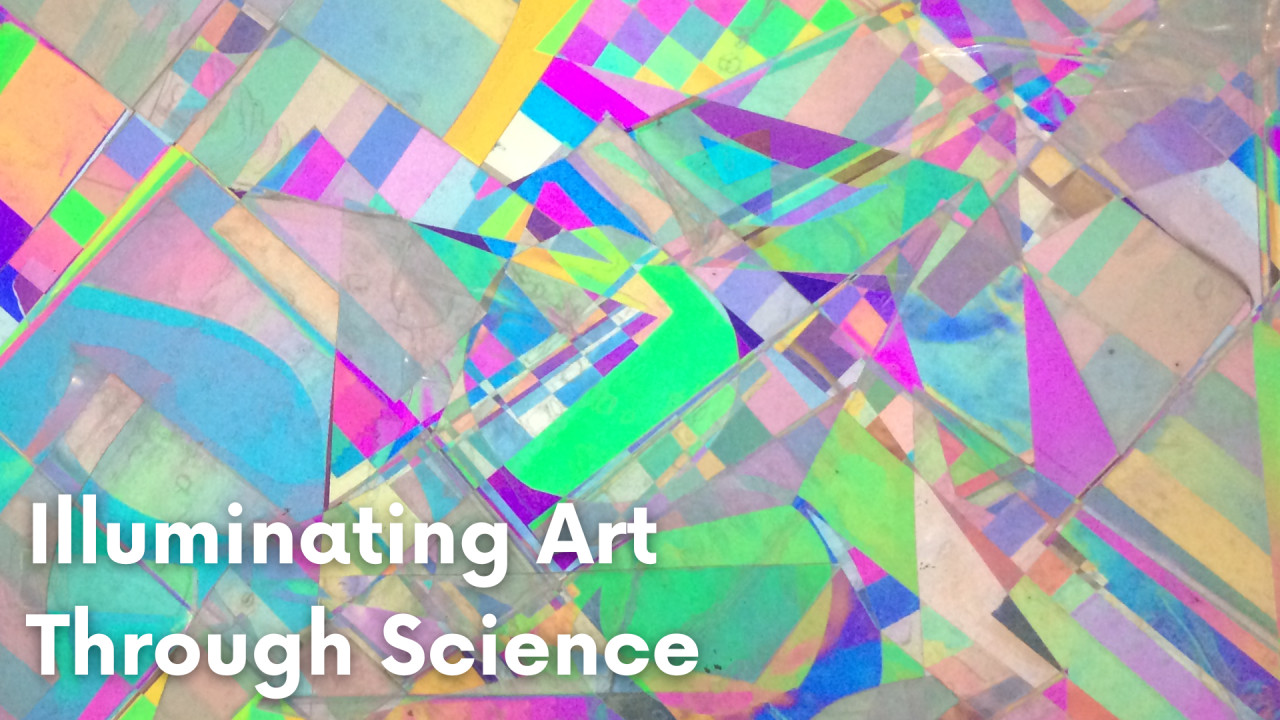 Like many of us, Trent Physics professor, Dr. Aaron Slepkov used the pandemic lockdowns to explore new interests. What began as a fun polarization collage, or “polage” craft activity for his kids ended up as a well-received paper in the American Journal of Physics.

“While we were in isolation, I saw a tweet from the people I follow in the optics community with some very interesting stained-glass-like images saying ‘here's a fun demo to do while you're at home’,” explains Professor Slepkov. “After about a week of playing around, my curiosity as a trained physicist led me to ask questions based on my understanding of how polarization works, and as I explored this further and tweeted my results, I realized that there might be a gap in our understanding of exactly how this works.”

Prof. Slepkov’s paper, the result of months of play as he describes it, explores the phenomenon of polarization-filtered coloration through a popular science/artistic lens in a manner that is understandable, educational, and interesting to educators, students, and artists alike.

Polarization-filtered coloration was discovered and named in the 1800s and, among others, underpins LCD screen technology. It is a highly mathematically complicated field of optics, which Prof. Slepkov makes more accessible with the use of visuals to, for example, illustrate the importance of the order of operations.

Although an avid art lover, Prof. Slepkov would never have considered himself an artist. Yet, his paper is scattered with beautiful pieces of “polage” art, with one of his pieces also making the cover of the journal.

Exploring the interface between art and science

One of the reasons for pushing forward with this research project was Prof. Slepkov’s involvement in Trent’s innovative Bachelor of Art and Science program, which allows students to apply both creativity and analytical rigour to drive discovery at the intersection of the two disciplines.

“When I got into this, I was constantly thinking about the program and the intersection of art and physics,” explains Prof. Slepkov. “It encouraged me to explore this phenomenon from both an artistic and physics standpoint.”

One of Prof. Slepkov’s goals with this paper is to give artists who use this medium a better understanding of the process from a physics standpoint and equip them with the knowledge to deepen their exploration of this interesting artform.

The language of science

Although physics research is often deeply technical and difficult to explain to a lay audience, Prof. Slepkov believes that, when it is possible to present your work in an accessible manner, it is important to do so. Therefore, it is no surprise that communication and language are central themes in his classroom.

“I spend a lot of time talking about language and how finding just the right word in physics can remove so many barriers to understanding, but it's not about making things as simple as possible, you also need to consider things like connotation,” he explains, adding that the connotation is also a key topic in his paper. “In the paper, I call out the traditional name for this phenomenon, interference colour. Interference has a certain connotation and, as an educator, I argue that it can be misleading to use the word interference in this context.”

His paper has sparked a Twitter debate among experts and physicists about the underlying principles of the phenomenon and the semantics around using the term interference.

“It's just so enriching to write a paper that is both very specifically physics and optics but also meant to educate a lay audience. The value of the work was not in the breakthrough, but in the writing to be understood by a broad optics audience,” says Prof. Slepkov. “I think it kind of lives in two worlds where to one extent it’s popular science and art that's accessible to everybody, and on the other hand, experts and physicists are inspired to think a little bit about the meaning of the underlying principle.”