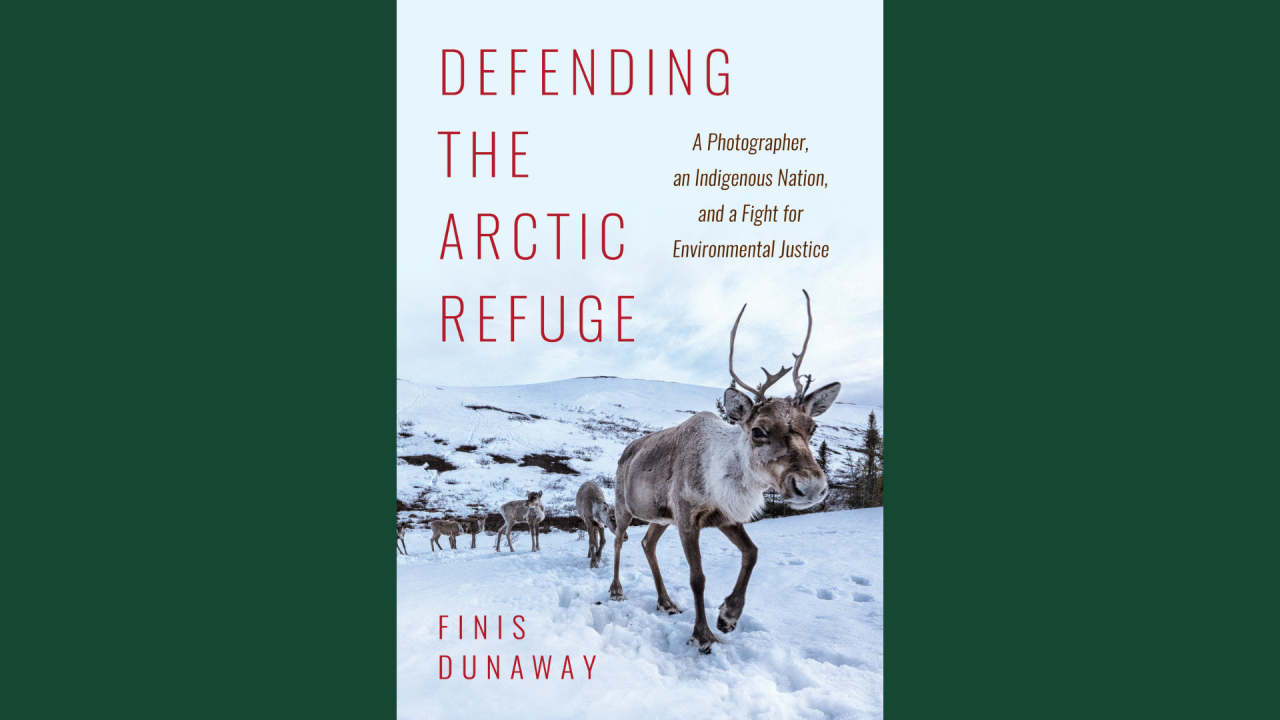 The fight for environmental justice for a threatened wildlife refuge in Alaska is the subject of an award-winning book researched and written by Trent University History professor Dr. Finis Dunaway.

Defending the Arctic Refuge: A Photographer, an Indigenous Nation, and a Fight for Environmental Justice earned Professor Dunaway the 2022 Spur Award for Best Contemporary Nonfiction Book by the Western Writers of America. The publication is a reflection of not only his interest in environmentalism, but also the power of stories that intersect history, culture, natural landscapes and social justice.

“I am thrilled and honoured that this book was selected for a Spur Award,” said Prof. Dunaway. “I am also humbled by this recognition because the story is really about the work of others who led an incredibly moving and effective fight to protect a vital ecosystem. I am grateful to all the people—Indigenous leaders, environmentalists, and local activists across the continent—who shared their stories and knowledge with me, and helped me understand this history differently.”

UPDATE:  In June 2022, Prof. Dunaway was also awarded the 2022 Alanna Bondar Memorial Book Prize, for this book. This biennial prize is awarded to provocative, original, and stimulating books on environmental topics.

Defending the Arctic Refuge focuses on the environmental activism of Lenny Kohm (1939-2014) and his years-long battle against fossil fuel drilling in the Arctic National Wildlife Refuge. Alongside representatives of the Gwich’in Nation, Kohm travelled across the United States with two slide projectors and a slideshow of images to rally grassroots opposition to proposed oil drilling in the refuge. The land is home to already-vulnerable species like caribou, polar bears, and migratory birds from around the world, and is considered sacred by the Gwich’in, who live in communities in Alaska, the Yukon, and Northwest Territories, and rely on the Porcupine caribou herd, which has its calving grounds in the refuge.

“It’s hard to imagine someone loading up a car with slide projectors, as Lenny did, but this unlikely story demonstrates how visual images and testimony from frontline communities can organize and mobilize the grassroots,” said Prof. Dunaway. “It shows how respectful relationships can be built between Indigenous and non-Indigenous peoples. And it indicates the urgency of struggling to protect this land before it’s too late.”

An Offer by Trent’s Research Office

Recognizing the important role that Northern Indigenous communities played in this movement, and to Prof. Dunaway’s story, Dr. Cathy Bruce, acting vice president of Research & Innovation at Trent, helped ship copies of the book to the North.

“The Research Office aims to enhance and advance the work of our researchers, and as part of these efforts, we helped get this book into the hands of the participants, those who inspired this publication,” said Professor Bruce. “One of Finis’ strengths, as a writer and researcher, is his ability to depict the thousands of kilometers of wilderness and animal life through the eyes of dedicated individuals and northern communities. His gift for storytelling is one of the key qualities that connects Dr. Dunaway with his students and inspires them at Trent and beyond.”

As opponents work to galvanize diverse groups to safeguard these threatened lands, Prof. Dunaway’s book makes clear that the fight for environmental justice is far from over.

“With the refuge under greater threat than ever before, this history has a new relevance for our time,” says Prof. Dunaway.

Learn more about the Western Writers of America and the Spur Awards.

The Death of Asylum and Asylum’s Afterlives: 2023 Kennedy Lecture in Global Social Issues
What goes around comes around — or does it? Reflections of a 70s guy (Harry Kitchen Lecture in Public Policy)
Immigrants, Aging & Caregiving: Fostering Social Inclusion Amongst Older Immigrants