Thomas H.B. Symons was a man who embodied the motto of the university that he founded. The words nunc cognosco ex parte (now I know in part) framed his life, but also a wider, compelling pedagogy that underscored the importance of self-improvement, humility, and social justice through higher education. His curiosity for the world around him was only surpassed by his compassion for others. He particularly enjoyed conversations with young scholars and took great interest both in their studies and their post-university careers. His own career took him across Canada and around the world, but he has always considered Peterborough home. From Marchbanks, his beloved residence formerly owned by Robertson Davies, Professor Symons created a base of operations while raising three successful children with Christine, his wife of 57 years.

In 1961, Professor Symons was approached by a committee of Peterborough citizens who asked the industrious and well-liked scholar to create a university for the city. He accepted the daunting challenge and became the founding president of what would be Trent University. His vision for Trent as a fully-formed, collegiate university brought the institution to life and has sustained it for over 55 years. While many dubbed Trent “Oxford on the Otonabee,” Professor Symons would later remark that it was England’s Durham University that provided much of the inspiration for the new university’s federation of small, interdisciplinary colleges within a larger degree-granting university. Professor Symons saw institutions of higher education, including his beloved University of Toronto, as becoming akin to "an impersonal factory" where an "academic elephantiasis" of unchecked growth was diminishing the educational experience. Today, Trent’s dynamic and evolving college system reinforces the vision Professor Symons had of a place where everyone would know everyone else and all members of the community would intermingle and interact.

Professor Symons also dreamed of a place where Canadian Studies could become a significant and creditable avenue of scholarship — a place to study all things Canadian —  from History and Art to Science and the Environment to Canada’s peoples and cultures. It was under Professor Symons that Trent University created the first Indigenous Studies program in the country, soon followed by the Canadian Studies program and the groundbreaking Journal of Canadian Studies. This model would inspire several other programs at the university such as Cultural Studies and International Development Studies. His vision of higher education through interdisciplinary learning in the liberal Arts and Sciences has become one of the defining attributes of Trent University.

Professor Symons served as Trent University's president and vice-chancellor for 11 years until 1972. In 1979, Professor Symons was given the title of Vanier Professor. Upon Professor Symons’ retirement in 1994, he was made Vanier Professor Emeritus and the Nassau Mills campus of the University was officially renamed in his honour for his years of dedication and tireless work. After “retirement,” Professor Symons remained an active member in the University community as the honorary president of the Alumni Association and of the Trent Legacy Society. He also continued as a member of the Board of the Frost Centre for Canadian Studies and Indigenous Studies and gave guest lectures in various programs from History to Chemistry.

Professor Symons was also a respected voice in business. The thoughtful and even-handed approach that he exhibited as a university administrator led to invitations to participate on the Boards of various corporations. This included Celanese Canada Inc., where he was chair of the Social Responsibility Committee, and Gilbey Canada Inc. (UDV Canada Inc. and later Diageo) where he was a director. Professor Symons particularly cherished his relationship with Thomas J. Bata, whose assistance was instrumental during the early days of Trent University. Professor Symons was proud of the role he later played as chairman of the Board for Compass Ltd. (Bata Shoe Organization). He was also a founding Board member of the Bata Shoe Museum in Toronto.

Professor Symons was awarded the province of Ontario's highest honour, the Order of Ontario, in 2002. This award recognized his contribution to the province thorough the mediation of French language disputes in Sturgeon Falls, 1971, and in Cornwall in 1973. From the funds he received for his work in Sturgeon Falls, he set up the annual Symons Award for Excellence in Teaching which continues to honour the best instructors at Trent University. As Ontario's Commissioner of Human Rights from 1975 to 1978, he spearheaded major revisions to the province’s Code notably in area of civil rights for homosexuals. Additionally, Professor Symons was involved in the Board of Governors of the Ontario Medical Foundation, the Ontario Arts Council, the Advisory Committee for Heritage Ontario, the Architectural Conservancy of Ontario and was a founding member of Heritage Canada, to list a few of his activities. He served as the chair of the Ontario Heritage Trust from 2010 until 2017.

The fact that Professor Symons held a deep love for Canada is no surprise to anyone who knew him. Indeed, the breadth of his commitment to almost every facet of Canadian life is remarkable. From 1968 to 1975 he served as the chairman of the Policy Advisory Committee for the Rt. Hon. Robert Stanfield, leader of the opposition and sometimes known as “the best prime minister Canada never had.” From 1972 to 1975, he famously led a national Commission on Canadian Studies. Its published findings entitled To Know Ourselves, or the eponymous Symons Report, inspired a generation of scholars, policy makers and citizens dedicated to the study of Canada. In 1976, his efforts led to his investment as a member of the Order of Canada (later promoted to companion) and his election as a fellow of the Royal Society of Canada (1977). He has served as chairman on numerous federal committees and institutions including of the National Commission on Canadian Studies, the National Library Advisory Board, the Historic Sites and Monuments Board of Canada, the Canadian Educational Standards Institute, the National Statistics Council of Canada, the Canada Council, and the Social Sciences and Humanities Research Council of Canada. Additionally, an annual lecture entitled “The Symons Lecture on the State of Canadian Confederation” and medal was created in his honor at the Confederation Centre of the Arts on Prince Edward Island. In 2016, Professor Symons received the Gabrielle Léger Medal from the National Trust for Canada in recognition of his lifetime contribution and leadership in heritage conservation in Canada.

Internationally, Professor Symons distinguished himself through his work as chairman of the Association of Commonwealth Universities and chairman of the International Board and vice-president of the International Council of United World Colleges. Professor Symons was awarded the Distinguished Service to Education Award of the Council for the Advancement and Support of Education in 1982. He was the first Canadian to ever receive this award whose council represents 2,300 universities and colleges in the United States, Canada, Europe and South America. Additionally, Professor Symons received an honorary degree from the University of Colombo in Sri Lanka as well as was elected a trustee and an honorary fellow by Oriel College, Oxford University and a visiting scholar and fellow by Cambridge University. He is the recipient of 13 honorary degrees from universities and colleges across Canada and the recipient of the both the Queen Elizabeth II Golden and Diamond Jubilee medals. In 2016, he was honoured with the Founders Award for Excellence in International Education from the Canadian Bureau for International Education (CBIE). Many do not realize that in addition to the creation of Trent University, Professor Symons was instrumental in the founding of Fleming College and over a dozen other colleges and universities around the world. His particular efforts in the creation Peterborough’s Sacred Heart College resulted in a Knighthood from the Vatican in the Order of Saint Sylvester in 2012.

Professor Thomas H.B. Symons possessed an unparalleled passion for scholarship, his community, and his country. His vision for the nation was one where all Canadians could know themselves through an appreciation of their past and through a mutual understanding of their shared present. In doing so, it was his sincerest wish that Canadians would find both the inspiration and hope required to face the future together. On his personal journey to humbly know more, he has touched the lives of countless people. Thanks to the legacy of Professor Thomas H.B. Symons we all are a little better, know a little more of our country; and today, are all, in part, diminished.

In lieu of flowers, the Symons family has asked that donations be made to the Symons Trust for Canadian Studies. 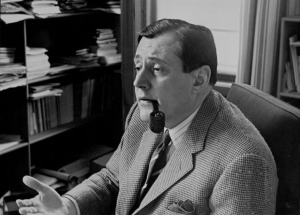 Obituary by Don Tapscott '66, Trent University's Eleventh Chancellor (2013 - 2019).  This obituary was published in Canada's National Newspaper, The Globe and Mail.

Her friend for more than 50 years, Sylvia Sutherland pens touching tribute to the founding president of Trent University, Tom Symons.