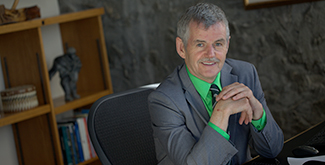 Dr. Leo Groarke, was installed as the eighth President and Vice-Chancellor of Trent University in 2014 and was reappointed for a second term in 2019.

During his presidency, Dr. Groarke has fortified the University’s budget, overseeing the University’s coming of age in its 50th anniversary year and leading it to six consecutive years of enrolment growth, balanced budgets and a groundbreaking inaugural debenture and A bond rating. He introduced responsibility centred management at the University and has led institutional reviews to revitalize Recruitment, Internationalization, Student Success and Retention, Research, Career Services, and the Colleges.

As President of Trent, Dr. Groarke has overseen extensive developments on the Peterborough Campus  including the construction of the award-winning Student Centre; a widely-acclaimed renovation of the architecturally-significant Bata Library to a library of the future; infrastructure toward the creation of University’s environmentally-focused research park, Cleantech Commons; and a new ball diamond and playing field. He has ensured the growth and expansion of Trent’s Durham campus in the Greater Toronto Area with a new residence and academic building and expansion of land holdings for future development.

Throughout his 30-year career in higher education Dr. Groarke led wide-ranging organizational transformation in numerous administrative and academic roles. He held the position of Vice-President, Academic and Provost at the University of Windsor and was Principal/Vice-President of Wilfrid Laurier University’s Brantford campus, where he was instrumental in the development of a new campus that has, in partnership with the City, become a model for downtown revitalization in Canada.

An accomplished philosopher and a recognized leader in post-secondary education, Dr. Groarke holds a Ph.D. in Philosophy from the University of Western Ontario. He has studied at the University of Helsinki and Simon Fraser University and received his B.A. Honours and M.A. in Philosophy from the University of Calgary. With decades of achievement and an international reputation in teaching, research, editorial board membership, conference and institute leadership, he is also a respected philosophy scholar, an author and editor of many critical notes, articles, journals and books, including the acclaimed text Good Reasoning Matters! and served as editor-in-chief of the journal series Windsor Studies in Argumentation.

As a researcher his interests include ancient philosophy, higher education, the history of ideas, social and political thought and "informal" logic. His current focus examines the role of visual images in reasoning, argument and persuasion – a role that is heightened in today’s world of digital communication.

Dr. Leo Groarke was born in London, England. His family immigrated to Canada when he was three and grew up in Western Canada, on a reserve close to Fort St. John; in Edmonton; and in Calgary. He has five children – Scott, Jazz, Katie, Jessie, Natalie – who have, in the great majority of respects, turned out quite well.

An avid kayaker, Dr. Groarke frequently takes advantage of the proximity to water at Trent’s Peterborough and Oshawa campuses. 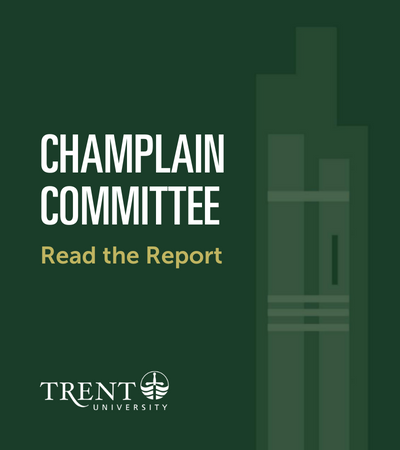