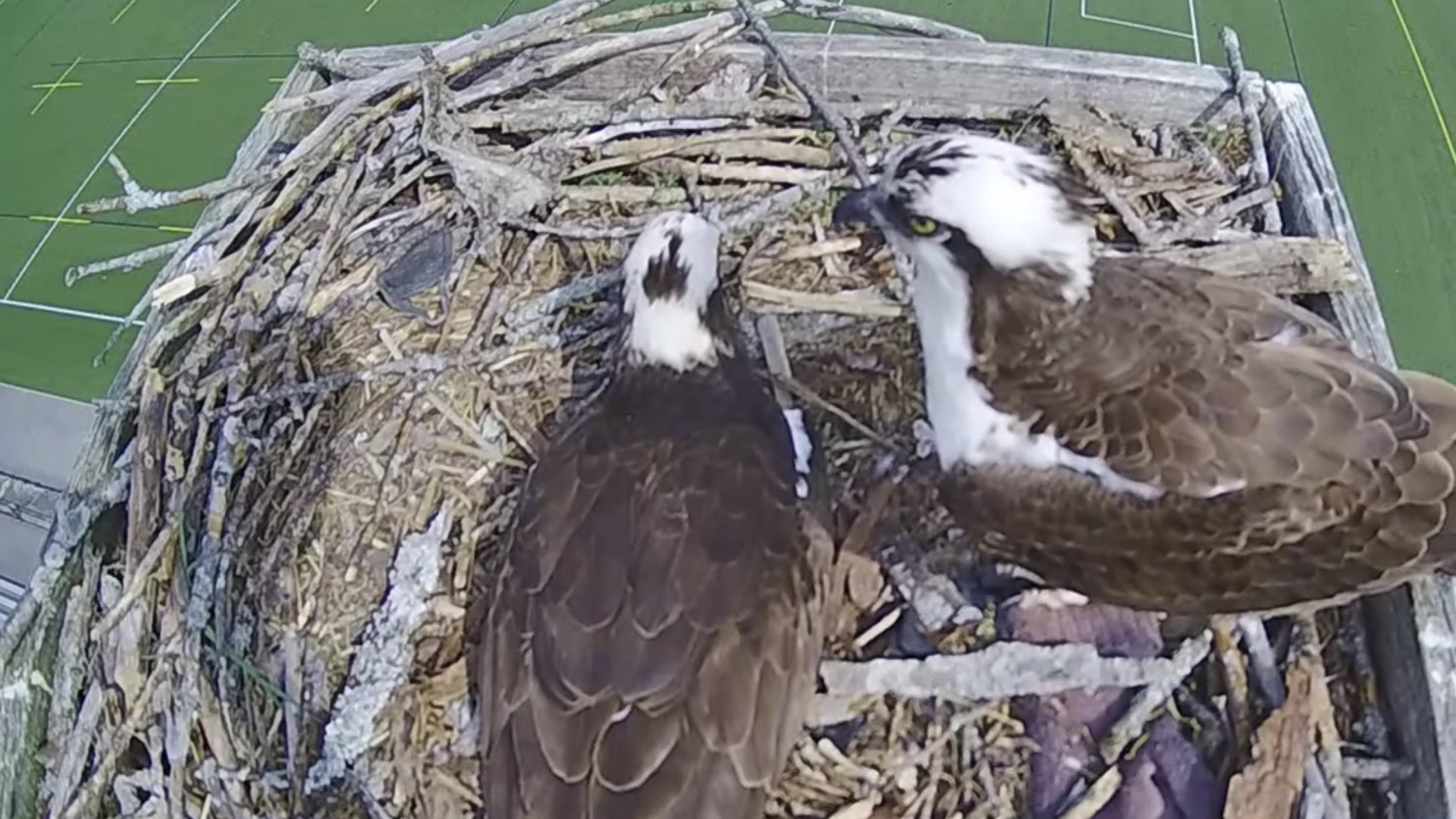 NOTE: Due to damage caused by recent storms, the Osprey Cam is currently unavailable. Following the Migratory Birds Convention Act, the University cannot currently interfere with the nest. Damage will be assessed and an update on the status of the Osprey Cam will be shared once the Excalibirds leave their nest for the season.

WARNING! Nature is beautiful but can be graphic. The Osprey Cam displays raw, unfiltered nature that might include wildlife interactions and weather calamities that we cannot control. We are just observers. Viewers may see the birds eating prey items at any point and may find these images disturbing. Ospreys mainly eat fish, but also opportunistically feed on small birds. Ospreys usually have two to four young in the spring, and the eggs are laid a couple of days apart. Older offspring may push younger hatchings out of the nest in competition for food. These are natural behaviours. Following the Migratory Bird Act, Trent will not interfere with life in the nest.

The Osprey Cam is just one example of the advantages of Trent’s natural environment here along the banks of the Otonabee River in Peterborough, Ontario. Situated on approximately 1400 acres of trees, open fields, streams, and lush forest, the campus provides a unique learning environment for students and leading researchers, and is home to over 100 innovative undergraduate academic programs and 40 graduate programs. As one of Canada's leading environmental universities, Trent is renowned for research in conservation biology, climate change, water quality and wildlife DNA analysis. Our undergraduate programs in Biology and Environmental Science are ranked among the top 20 university programs in Canada. Here at Trent, 60% of Trent's lands are also dedicated green spaces.

Did You Know? Some Facts About Ospreys

About the Osprey Cam

Most ideas start with a lightbulb moment. The Trent Osprey Cam was no different. A lightbulb high on the pole where the osprey nest is located in Justin Chiu Stadium on Trent’s Symons Campus needed to be changed. This was an ideal time to install a camera.

While we appreciate our viewers will have questions and comments about the Osprey Cam and the life of these spectacular campus residents, following the Migratory Bird Act, it is illegal for Trent to interfere with life in the nest. As such, the quality and availability of the camera may vary.

The University will not respond to questions about the osprey nest. Viewers are invited to learn more about osprey and their natural behaviours at All About Birds Cornell Lab of Ornithology, and the Canadian Wildlife Federation.

Caution: This video stream is bandwidth intensive. Although tuning in regularly to watch the ospreys is recommended, we don’t recommend leaving the cam running in your browser if you are not actively watching it, to avoid any surprises on your next internet bill.

Special thanks. The Osprey Cam was inspired by former Facilities Manager Mr. Martin Kennaley, and made possible through donations and in-kind support from Facilities, Information Technology, School of Environment, Department of Biology, Animal Care & Biology Undergraduate Society (BUGS) and donations from the general public.