Trent University has been an academic leader in Indigenous Studies since 1969. Across the University, we work to build and strengthen relationships, understanding and reconciliation between settlers and Indigenous communities. While at Trent and beyond, we encourage you to learn about the treaties where you live, and walk a path of reconciliation. These resources are designed to provide support for faculty, staff, and students in learning about the treaty and traditional territory on which Trent is located, and in engaging with reconciliation. 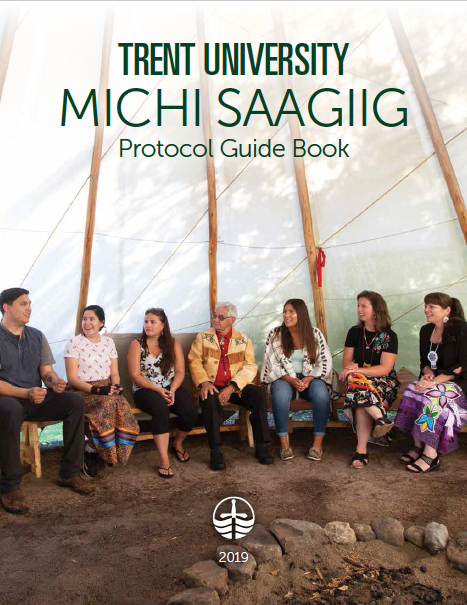 Trent University, in Peterborough and Durham, is located on the treaty and traditional territory of the Mississauga (Michi Saagiig) Anishnaabeg, which is made up of Curve Lake First Nation, Alderville First Nation, Hiawatha First Nation, and the Mississaugas of Scugog Island First Nation. A land acknowledgment recognizes the traditional lands of Indigenous peoples and is an appropriate way to show respect to Indigenous people of the region, their ancestors, and communities. It recognizes the significance of the land and our individual relationships with the land.

A smudging ceremony uses various medicines such as sage to create a cleansing smoke that is meant to heal the mind, body and spirit. Smudging occurs often at Trent University, and you are encouraged to participate when you have the opportunity.

A sacred fire is a common element of ceremonies in Indigenous cultures, including the Michi Saagiig Anishinaabeg. There are certain protocols to participating respectfully in a ceremony with a sacred fire.

Trent University honours the land upon which it is built, and its traditional occupants.

The Trent community is encouraged to visit and reflect upon the importance of the original treaties between Canada and local Indigenous Nations and experience first-hand the historical significance of the pre-confederation treaty map and signatories of the Michi Saagiig Anishnaabeg.

The Land on Which Trent Sits is on display in both Bata Library and Durham GTA atrium. These exhibits display the treaties between Canada and local Indigenous Nations. Watch Trent Durham GTA treaty wall unveiling.

The Treaty Rock is a three-limestone boulder, located at the Bata Library bus loop, bearing the symbols of the Doodemag (clan totems) carvings of the Treaty 20 Michi Saagiig signatories as well as a statement identifying the Symons Campus lands as being situated on Michi Saagiig traditional territory. The installation was unveiled at the inaugural National Day for Truth and Reconciliation on September 30, 2021. Watch Treaty rock unveiling.

History of the Treaties

Trent sits on the homeland of the Michi Saagiig Anishnaabeg who have lived in this territory for thousands of years. The arrival of Europeans led to a number of agreements or treaties which saw Indigenous lands transferred to the British Crown. These agreements were the way in which Britain, and later Canada, acquired land for European settlers.

Based on the Royal Proclamation of 1763, the Crown began to enter into treaties with Indigenous nations to transfer lands from Indigenous ownership to Crown. This process started before the establishment of Canada in 1867, continues into the 21st century.

After the War of 1812, in order to accommodate a growing European settler population, Upper Canada, as this area was known before Confederation, entered into a series of treaties with Indigenous Nations. In this area, they treated with the Rice Lake Mississauga.

After Confederation in 1867, Canada entered into a half-century of treaty-making with Indigenous peoples. The 11 numbered treaties were intended to open up the west for settlement and make way for a railway. In return, Indigenous nations were promised annuities, schools, health care and other forms of assistance. These treaties, seen as land cessions by Canada, were seen as land-sharing agreements by Indigenous leaders.

The signing of the Williams Treaties of 1923 marks the end of a fifty-year period of treaty-making between the new country called Canada and Indigenous nations.

Battell Lowman, E., and Barker, A. Settler: Identity and Colonialism in the 21st Century. Halifax and Winnipeg: Fernwood, 2016.

Joseph, B. 21 Things you may not know about the Indian act. Indigenous Relations Press, 2018

Simpson, Leanne. As We Have Always Done: Indigenous Freedom Through Radical Resistance. University of Minnesota Press, 2017.