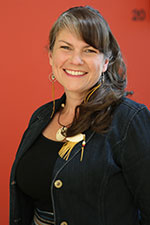 Dr. Dawn Lavell Harvard, Ph.D., is a proud member of the Wiikwemkoong First Nation, on Manitoulin Island, the first Aboriginal Trudeau Scholar, and has worked to advance the rights of Aboriginal women as the President of the Ontario Native Women's Association since 2003. After serving as Vice-president of the Native Women’s Association of Canada for three years, Dawn was elected National President at the 41st Annual General Assembly, July 11, 2015 in Montreal, Quebec. After fulfilling her promise to see the MMIWG Inquiry initiated, in October 2016, Dawn left her role as National Leader and took on the role of Director at the First Peoples House of Learning at Trent University. 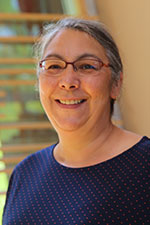 Sandra is the Finance Officer for the First Peoples House of Learning and the Chanie Wenjack School for Indigenous Studies.  She is a member of the Cree Nation of Eastmain, from Moose Factory Ontario; Trent ’03. Come out to the teepee for bannock and tea.

Ashley Lamothe, B.H.Sc., is a proud Anishnaabekwe/Metis mother to two tiny humans. She holds a bachelor's degree in Health Sciences, Certifications in Facilitation, Indigenous Women's Leadership, and Digital Media.  Ashley started her own business Creative Kwe and loves combining Indigenous ways of knowing with creativity to create safe spaces for Indigenous people to thrive.  In her role at FPHL, Ashley supports students in exploring their beliefs about themselves as learners, their university experience, and their world; providing Academic, Financial, and Housing Supports.

As a clinical social worker, specializing in the field of trauma recovery and Indigenous perspectives, Laraine's practice relies on relationship, respect and reciprocity. Grounded in Cultural Safety and Etuaptmumk (Two-Eyed Seeing), the fabric of this journey is stitched together with the connections, customs, words and wisdom of those who accompany her. This tapestry has proven both robust and enduring, resplendent in its core convictions, commitments, and composition.

Dr. Rachael Nicholls, Ph.D., is FPHL's Access and Mentorship Coordinator, providing a wide range of supports to Indigenous Students at Trent, with a specialized focus on Foundations of Indigenous Learning Diploma Program students.

Angeni Lovelady is a Niizh-Manidoowag (Two-Spirit) person of mixed ancestry (Algonquin Aniishinaabeg and Scottish/English). They are the Two-Spirit Program Coordinator at FPHL and focus their work on creating engaging and inclusive programming for Two-Spirit and Indigiqueer students within Trent University as well as educating the broader community on Two-Spirit knowledge and history.