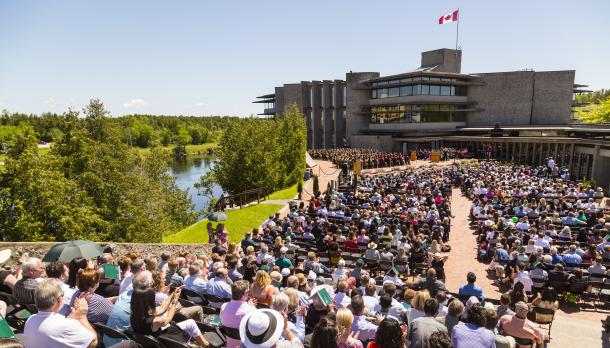 Trent University will honour four distinguished Canadians, including a corporate mental health advocate; an orator, author and first-hand witness to the Holocaust; the executive director of the Ontario Federation of Indigenous Friendship Centres; and an innovative architect known for his work at Trent and around the world, as the University’s 2018 honorary degree recipients at Trent’s Convocation ceremonies to be held this June in Peterborough and Durham GTA.

“In their uniquely talented ways, these extraordinary Canadians lift up our society,” said Dr. Leo Groarke, president and vice-chancellor at Trent University. “These champions of human dignity and spirit bring worlds together through education, advocacy, artistry and vision. It is a tremendous privilege to celebrate their exemplary achievements with our highest honour, an honorary doctorate from Trent University.”

The following individuals will be presented with an honorary doctor of laws at this year’s ceremonies:

George Cope – Tuesday, June 5, 2018 – 2:00 p.m. ceremony
George Cope, president and CEO of BCE Inc. and Bell Canada, will be honoured for his work as a corporate leader and champion for mental health.

Stephen Teeple – Wednesday, June 6, 2018 – 2:00 p.m. ceremony
Innovative architect Stephen Teeple will be honoured for his impressive contributions to the body of Canadian architecture in general, and to Trent University’s campus in particular.

Max (Tibor) Eisen – Tuesday, June 12, 2018 – 10:00 a.m. ceremony at Trent Durham GTA
Max Eisen, Holocaust survivor, author and educator will be recognized for his efforts in the area of Holocaust education and promotion of human rights.

Profiles are below and full bios, including nominator and recipient quotes, are available on the Convocation website at trentu.ca/convocation

In addition to his long-standing success in the business world, Mr. Cope has become well-known for his role in spearheading the launch of the Bell Let’s Talk initiative, the largest-ever corporate commitment to Canadian mental health. A personal and professional commitment to raising awareness, reducing stigma and growing funding in support of mental health has resulted in this successful national initiative, recognized as one of the country’s most prominent community investment campaigns.

In recognition of his efforts regarding Bell Let’s Talk, Mr. Cope received the Queen’s Diamond Jubilee Medal. He was appointed a member of the Order of Canada in 2014, named Canada’s Outstanding CEO of the Year in 2015 and inducted into the Canadian Business Hall of Fame in 2018.

Sylvia Maracle
Sylvia Maracle (Skonaganleh:ra), Mohawk from the Tyendinaga Mohawk Territory and a member of the Wolf Clan, is known for being dedicated to creating healthy communities and improving the lives of urban Indigenous people in Ontario and across Canada.

Ms. Maracle is the executive director of the Ontario Federation of Indigenous Friendship Centres, the largest urban Indigenous service network in the province providing culturally appropriate services. She has been involved in the Friendship Centre movement for several decades. She is the Indigenous chair of the Executive Committee to End Violence against Indigenous Women and Girls, a member of the Indigenous Justice Group, and has served on the Board of Directors for the Centre for Addictions and Mental Health. Ms. Maracle was also a founding member of the Native Studies Ph.D. Council at Trent University.

Working to address violence against Indigenous women and in support of urban youth development, Ms. Maracle has worked tirelessly to guide policy and programming to improve the socio-economic status for Indigenous people. She continues to lecture across Canada and around the world on women's issues, urban development, and the cultural revitalization of Indigenous people.

Stephen Teeple
A highly-respected Canadian architect of innovative private and public-sector buildings ranging from museums and civic buildings to downtown condos, Stephen Teeple is principal of Teeple Architects, a Toronto-based company which he founded in 1989. On display around the world and across Canada, his artistic works are conscious of environmental and cultural sustainability while paying close attention to the spatial experience.

Closer to home, Mr. Teeple’s award-winning designs have come to life through many striking features of the Symons Campus at Trent University in Peterborough. Contributing to the natural landscape of the campus and Trent’s impressive architectural legacy, Mr. Teeple designed the Trent University Childcare Centre (1994), the Physics Building (1999), the Chemical Sciences Building (2008), and most recently the new Student Centre (2017).

Outside of his company, Mr. Teeple is a prominent member of the Canadian arts and design community, committed to active and ongoing engagement in all aspects of discourse regarding design, creativity and the public realm. He is a Fellow of the Royal Architectural Institute of Canada and a member of the Royal Canadian Academy of Arts.

Max Tibor Eisen
Max (Tibor) Eisen is a Holocaust survivor. Born in Czechoslovakia in 1929, Mr. Eisen is, in fact, the only member of his large orthodox Jewish family to survive the Holocaust. Mr. Eisen survived slave labour in Auschwitz, Mauthausen, Melk and Ebensee Camps and was forced to go on a Death March in January of 1945 where thousands died from exposure to severe weather conditions and malnutrition.  He was liberated from the Ebensee concentration camp in Austria in 1945 as an orphaned teenager. After his arrival in Toronto in 1949, he studied English and worked a variety of jobs before launching his own manufacturing company in 1964. Considered a respected pioneer in his industry, Mr. Eisen retired in 1992.

As a first-hand witness and a survivor, Mr. Eisen has been long devoted to educating others about the Holocaust, encouraging understanding, and teaching about the dangers of hatred and discrimination in society. A survivor of a forced death march during the Holocaust, Mr. Eisen participates annually in the International March of the Living between the Auschwitz and Birkenau concentration camps held on Holocaust Remembrance Day.

Mr. Eisen has received many acknowledgments and awards for his tireless efforts including: a Ministry of Citizenship and Culture certificate; the Simon Wiesenthal Centre Award of Valour; the V’Ahavta, Tikun Olam Award; the 2014 Community Award by the York Regional Police Service; and the Commandant’s Commendation from the Canadian Forces College.