An honorary degree is the highest honour that Trent University can bestow on an individual and is given in recognition of exemplary achievements or social contributions in Canada or internationally. This year’s six recipients personify the University’s strengths in the environment, Indigenous studies, the study of Canada, social justice, and the liberal arts.

In a legendary career as a music and entertainment producer, personality and entrepreneur that spans over 50 years, Toronto-born Bob Ezrin has worked around the world on recordings, TV, film and live event production with a wide variety of artists including Pink Floyd, U2, Deep Purple, Taylor Swift, Alice Cooper, and Jay-Z among many others. He remains one of the most sought-after producers in the world, working primarily in Toronto, Nashville, and Los Angeles.

Mr. Ezrin is a co-founder of Wow Unlimited Media Inc. and the Nimbus School of Media Arts, both in Vancouver, and co-founder of 7th Level Inc in Richardson, Texas, and Enigma Digital in Los Angeles, both seminal companies in interactive education, entertainment, and social media. He served as co-chair of Clear Channel Interactive and chair of Live Nation Artists Recordings.

Having served on the boards of several foundations over the years, Mr. Ezrin is currently a director of the Canadian Journalism Foundation in Toronto and the Mr. Holland’s Opus Foundation in Los Angeles, as well as a Leadership Circle member of MusiCounts in Toronto. Along with U2′s the Edge, he co-founded Music Rising, an initiative to replace musical instruments that are lost in natural disasters.

Mr. Ezrin is also an avid environmental activist in Canada, the US and the UK. Together with Trent’s chancellor, Dr. Stephen Stohn ’66 and Dr. Cathy Bruce, vice-president of Research and Innovation at Trent, he developed a series of videos for Trent students on the importance of environmental activism. He has also been a guest lecturer on climate emergency and media at Trent.

With a prolific career spanning more than 60 years, Dr. Charles Krebs has influenced generations of biologists and ecologists worldwide with his teaching and research on the drivers of population and ecosystem change in natural and agricultural environments.

Dr. Krebs is an emeritus professor of Zoology at the University of British Columbia and Thinker in Residence at the Institute for Applied Ecology, University of Canberra. He has published more than 320 peer-reviewed publications and six books, including Ecology: The Experimental Analysis of Distribution and Abundance (Pearson), which is currently in its 6th edition and remains one of the most widely used ecology textbooks worldwide.

Dr. Krebs is best known for his large-scale field experiments aimed at explaining the drivers of animal population dynamics by manipulating species abundance and related interactions in natural conditions in boreal and arctic ecosystems. He continues to be involved in the longest-running ecological monitoring program in Canada’s boreal forest at Kluane Lake, Yukon, which he established 48 years ago. These experiments have advanced our understanding of the mechanisms underlying plant and animal population dynamics in these ecosystems and transformed the discipline of ecology.

The Honourable Dr. Lillian Eva Quan Dyck, member of the Gordon First Nation in Saskatchewan and first-generation Chinese Canadian, is the first female First Nation and Canadian-born Chinese senator. She is lauded for extensive work in the Senate relating to missing and murdered Indigenous women and for advocating for equity in the education and employment of women, Chinese Canadians, and Indigenous Peoples.

Dr. Dyck served as deputy chair and chair of the Standing Senate Committee on Aboriginal Peoples. In her role as senator, she was able to amend the criminal code to better protect women, especially Indigenous women and other vulnerable persons, from violence and abuse, including intimate partner violence. She also played a key role in ensuring that the federal government amended the Indian Act to remove all discrimination against the descendants of Indigenous women whose Indian status was unfairly taken away from them simply because they married non-Indigenous men.

In August 2020, on her 75th birthday, Dr. Dyck retired from the Senate, ending a 15-year term faithfully representing Saskatchewan and guarding the interests of Canadians without voices.

Dr. Dyck has been recognized for her prolific career through several awards including the National Aboriginal Achievement Award for Science & Technology; the YWCA Woman of Distinction Award for Science, Technology & the Environment; the Atlantic Human Rights Center Award; the YWCA Saskatoon Women of Distinction Lifetime Achievement Award; and most recently was appointed as an Officer of the Order of Canada. She has been presented with four eagle feathers by the Indigenous community and was awarded an honorary degree by Cape Breton University in 2007.

Lifelong feminist and social activist and writer, Rosemary Ganley, has made an outstanding contribution to public life in Peterborough, where she is a prominent voice on local issues, leads workshops, and actively participates in numerous organizations.

Deeply committed to youth engagement, Ms. Ganley lived for six years in Jamaica and Tanzania, and with her husband founded the development agency Jamaican Self Help (JSH), in 1980, which supported educational, health, youth, and other community-based activities in Kingston, Jamaica. JSH became a remarkable non-governmental organization that expanded its donor base and secured Canadian International Development Agency funding. Ms. Ganley visited Jamaica several times with volunteer and student groups from Peterborough, offering a real-world glimpse into life in Jamaica. She published a book on this experience: Jamaica Journal: The Story of a Grassroots Canadian Aid Organization.

Ms. Ganley represented Canada at the fourth UN Conference on Women in Beijing in 1995 and in 2018 served on the prime minister's Gender Equality Advisory Council for the G7 meetings in Quebec, where she met with G7 leaders. She also delivered the prestigious Margaret Laurence Lecture at Trent University on feminist theologies in 2011.

A prolific writer, Ms. Ganley was assistant editor of the independent newspaper Catholic New Times in Toronto, and her writing has appeared in the Globe and Mail, Toronto Star, Peterborough Examiner, The Green Teacher and Conscience magazine. Ms. Ganley continues to write a weekly column for the Peterborough Examiner and has published two collections of her columns in the past five years.

Social innovator, entrepreneur, changemaker and philanthropist, Ana Lopes has led numerous not-for-profit transformations with a focus on corporate governance and philanthropic strategy. Ms. Lopes currently serves as a director of The Tapscott Group Inc., a privately held think tank focusing on the digital revolution in business and society. She is also a director of the Toronto International Film Festival, Toronto Symphony Foundation, and Community Food Centres Canada, and a member of the International Portuguese Diaspora Council in Lisbon.

Many organizations have benefited from Ms. Lopes’ leadership and passion for a better world. She is a former chair of the Centre for Addiction and Mental Health Foundation and the Toronto Symphony Orchestra’s board of directors and has served on the boards of The Writers’ Trust of Canada, the World Wide Web Foundation, Sunnybrook Hospital Foundation, Women’s College Hospital Foundation, Business/Arts, and Trent University.

Ms. Lopes and her husband, Trent’s first alumni chancellor Dr. Don Tapscott ’66, are passionate mental health advocates, raising awareness for mental health and addiction research and services for the last thirty years. They also established the Tapscott Chair in Schizophrenia Studies at the University of Toronto.

In recognition of her work, Ms. Lopes received the Association of Fundraising Professionals of Greater Toronto Fundraising Volunteer of the Year award in 2009, and in 2013 WXN listed her as one of the 100 Most Powerful Women in Canada. In 2014, the President of Portugal awarded Ms. Lopes the Order of Merit. She was awarded the Queen Elizabeth II Diamond Jubilee Medal and was made a Member of the Order of Canada in 2011. 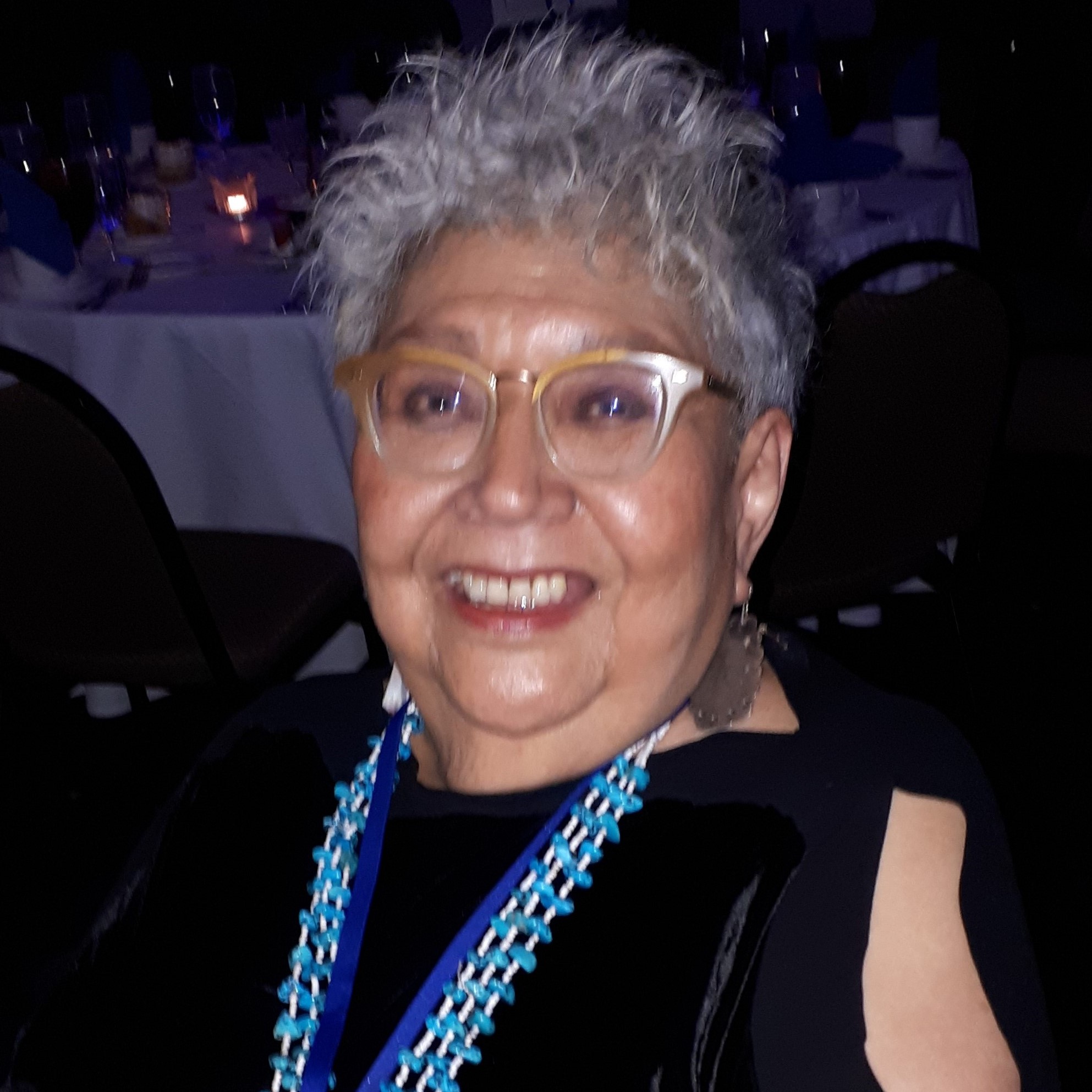 Choreographer, director, actor, and “grandmother of Indigenous theatre”, Dr. Muriel Miguel is a member of the Kuna and Rappahannock Nations and founding member and artistic director of Spiderwoman Theater in New York City, the longest-running feminist Indigenous theatre company in North America. She has directed almost all their shows since its founding in 1976, debuting with Women in Violence.

Dr. Miguel works independently as a director, choreographer, playwright, actor, and educator, and is recognized for making space for the performing of stories of Indigenous Peoples. She is currently a member of the NYC Department of Cultural Affairs Advisory Commission and holds an honorary doctor of Fine Arts from Miami University in Ohio.

A trailblazer in the development of storyweaving, a culture-based training practice for Indigenous students, Dr. Miguel is active in training Indigenous actors and dancers in this practice. She was assistant professor of Drama at Bard College (New York) and taught and directed a yearly production at the Centre for Indigenous Theatre, where she also served as program director for their three-week summer intensive program. Dr. Miguel was also the program director and instructor at the Indigenous Dance Program at The Banff Centre for the Arts, has lectured with Muriel Miguel: A Retrospective, and facilitated production residences using the storyweaving practice in conservatories and universities in the US, Canada, and Europe. She regularly visits Trent University to deliver workshops on Indigenous performance and performed in the Spiderwoman Theatre production that opened Nozhem First Peoples Performance Space in 2004.