Toward a Democratic Theory of Contagion: 2022 Elaine Stavro Distinguished Visiting Scholar in Theory, Politics and Gender 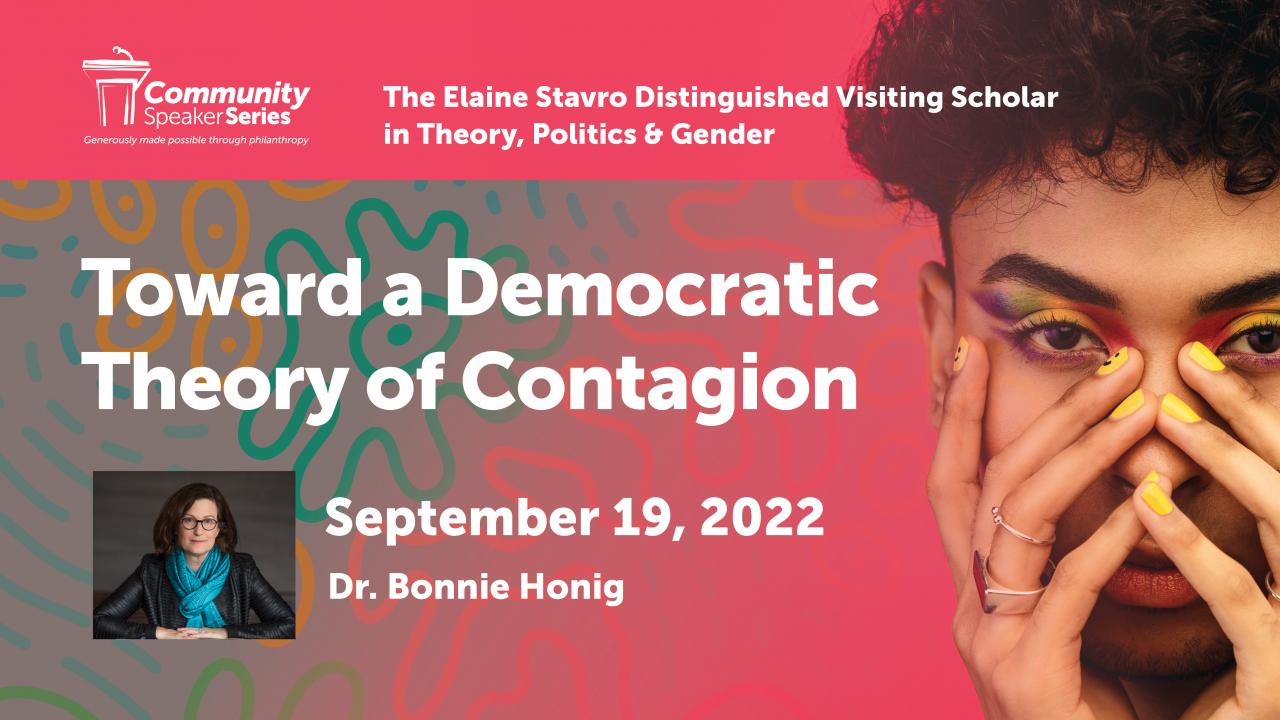 The Elaine Stavro Distinguished Visiting Scholar in Theory, Politics & Gender Studies was created to introduce Trent students to leading speakers in humanities and social sciences and significantly build on the University's reputation for interdisciplinary programs.

Known for her razor-sharp essays on popular culture, national politics, and political theory, Professor Bonnie Honig is keen to share her ideas with the Trent community from her current unpublished work.  The audience is encouraged to engage through Q&A discussions related to the lecture or her previous works, including “Public Things.”

Toward a Democratic Theory of Contagion

ABSTRACT: Noting that some texts of refusal feature centrally a contagion, this talk asks whether refusal is itself contagious. Three contagion models are identified and the politics of their containment analysed in the Greek tragedy, the Bacchae, the film The Fits, and John Rawls’ A Theory of Justice. The backdrop is the nearly lost concept of performativity as inaugural speech-action (JL Austin, How to do Things with Words), and Eve Sedgwick’s contribution to it of “deformativity” - a specific kind of speech act that is sexually shaming, aiming to control the spread of queerness lest it catches on

Bonnie Honig is Nancy Duke Lewis Professor of Modern Culture and Media (MCM) and Political Science at Brown University. In 2017-2018, she was Interim Director of the Pembroke Center and served as the Inaugural Carl Cranor Phi Beta Kappa Scholar. Currently an affiliate of the Digital Democracy Institute at Simon Fraser University and the American Bar Foundation, Chicago, her work in democratic and feminist theory studies the cultural politics of immigration (Democracy and the Foreigner, Princeton, 2001), emergency (Emergency Politics: Paradox, Law, Democracy, Princeton 2009), mourning (Antigone, Interrupted, Cambridge, 2013) and the democratic politics of refusal (A Feminist Theory of Refusal, Harvard, 2021). Her book Public Things: Democracy in Disrepair (Fordham, 2017) came out days after Trump’s 2017 inauguration and her first piece of public writing about that presidency, “The President’s House is Empty,” appeared on that inauguration day in the Boston Review. A collection of her public writing, Shell Shocked: Feminist Criticism After Trump appeared with Fordham in 2021.