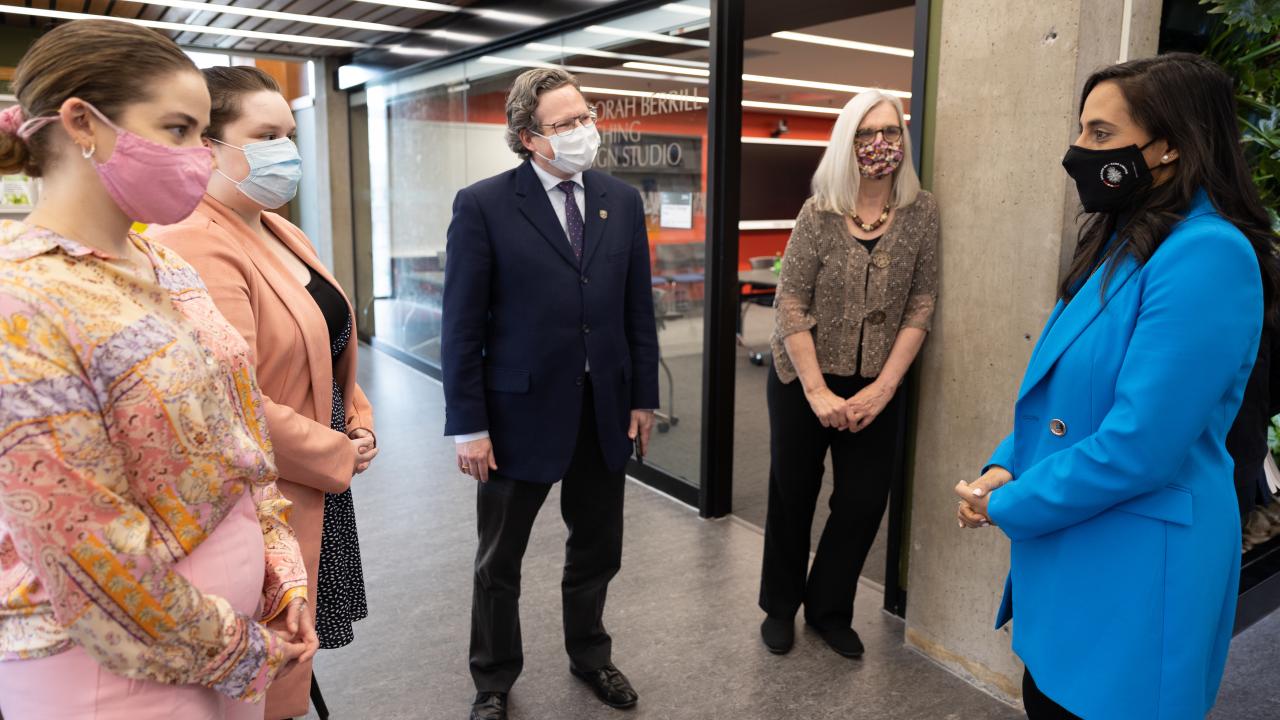 Canada Research Chair (CRC) in the Study of the Canadian North, Dr. Whitney Lackenbauer has been awarded a $750,000 three-year grant from Canada’s Department of National Defence (DND) to fund research initiatives and interdisciplinary collaborations through the North American and Arctic Defence and Security Network (NAADSN) focused on addressing core policy areas for Canada in the Arctic, as well as continental and global Arctic jurisdictions.

Professor Lackenbauer is at the helm of NAADSN, leading an international network of more than 100 active members from academia, NGOs, Indigenous organizations and industry partners. This is the second three-year grant from the DND through its Mobilizing Insights in Defence and Security (MINDS) program.

“It is a privilege to continue serving such a distinguished network of thinkers with a commitment of bringing knowledge to policy action,” said Prof. Lackenbauer. “NAADSN brings independent thinking to test assumptions about the changing security environment. Our mission is to understand the nature of threats in, through, and to the Arctic. For example, Russia’s recent invasion of Ukraine has cast into doubt the global rules-based of order, and this has spillover effect of what have been harmonious Arctic relations. It is now even more important to understand the dynamics of Arctic security and what that means for Canadians and people in the North.”

Over the next three years, Prof. Lackenbauer will continue to mobilize national and international expertise through NAADSN, bringing in diverse voices to examine and anticipate emerging threats, and guide policy development by generating and providing immediate access to leading-edge research.

On April 19, the Honourable Anita Anand, minister of National Defense visited Trent University to meet with Prof. Lackenbauer, as well as Vice President of Research & Innovation Dr. Cathy Bruce
and Director of the School for the Study of Canada Dr. Heather Nicol to discuss the renewed funding for NAADSN.

With the goal of expanding defence engagement, the new MINDS grant will help NAADSN direct greater resources and attention toward researching areas of climate security issues and engaging Northern stakeholders.
“The MINDS grant and the visit from Minister Anand highlight Prof. Lackenbauer’s important work, as well as Trent’s distinction as an institution with leading expertise in Canadian, environmental and Indigenous studies,” said Professor Bruce. “With Schools of Study dedicated to each of those disciplines, Trent University is well positioned to lead a networked approach to policy and practice through NAADSN.”

The new funding has already led NAADSN to establish an advisory board composed of representatives from Canada’s three northern territories, who will guide and direct the research and ensure it is aligned with northern priorities.

“What we have seen in the face of climate change in terms of accessibility and patterns of activity and emergence of strategic competition shows that the Arctic is not insulated from global challenges. It is an area of particular interest, but also an area of great opportunity to make smart investments in the interest of local communities and their well-being,” said Prof. Lackenbauer. “We have been supporting Indigenous organizations to ensure Inuit, First Nation and Metis perspectives on security and safety are reflected in defence priorities and that smart investments are advancing northern needs and addressing some of the serious inequities in our country.”

Student engagement and cooperation through NAADSN
The opportunities for undergraduate and graduate students to participate and contribute to NAADSN initiatives is also being led out of Trent University. Post-doctoral fellow Dr. Cheryl Mitchell is a co- lead for the Emerging Leaders Node, which promotes student research and fosters an international community of scholars made up of young learners and emerging researchers, who help build the network by advancing innovative thinking through events focused on networking, skills development and collaboration on ideas.

Between 2019 and 2022, during the first three years of the NAADSN program, members of the network put out a high-volume of work, publishing books, policy briefs, and research publications. This work has strengthened the advisory role that Prof. Lackenbauer and NAADSN offer decision makers in the DND, where they are providing direct input into Arctic policy and programming.

NAADSN has also helped modernize North American defence, committing a lot of effort to supporting and shaping what Canada’s role should be in the North American Aerospace Defense Command (NORAD), leading to the government making major commitments in warning systems.

Prof. Lackenbauer is available to speak with media about this funding and the work of NAADSN.