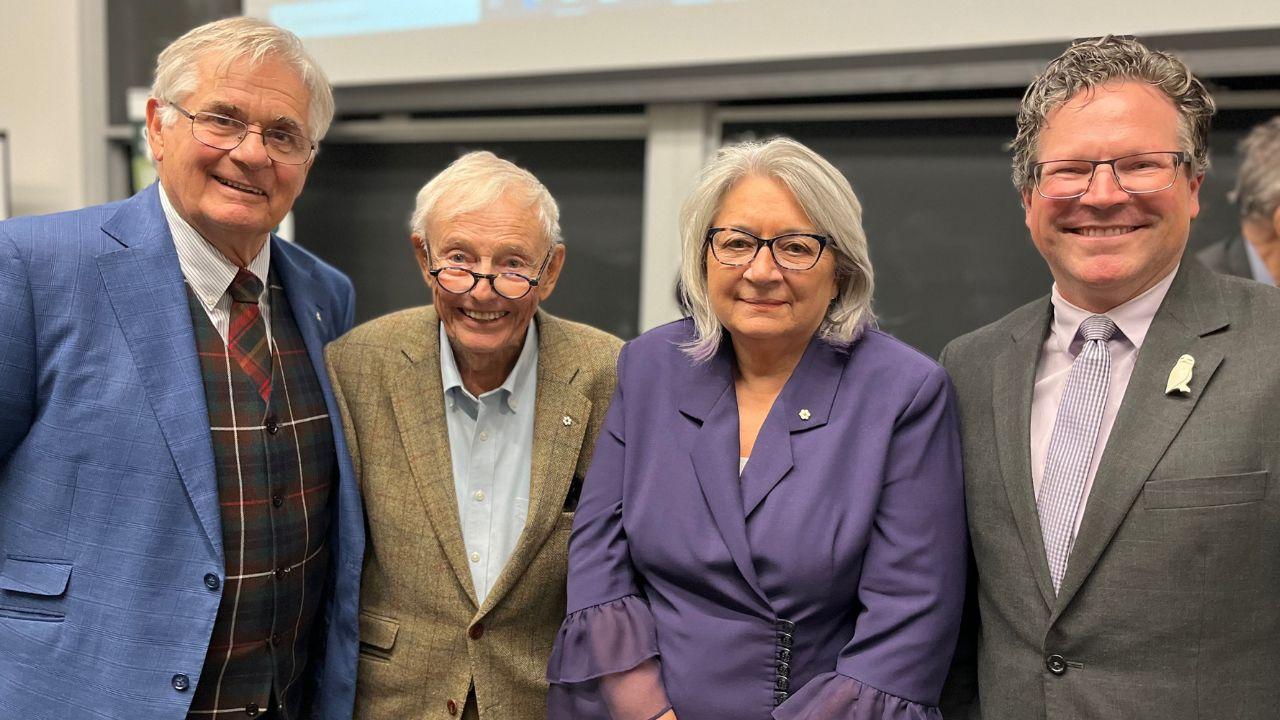 A one-of-a-kind Arctic conference drew Canada’s highest-calibre experts on Northern issues, including Her Excellency the Right Honourable Dr. Mary Simon, Governor General of Canada, to Trent University, to celebrate the life of Dr. Shelagh Grant and share combined understanding of Arctic history. As Canada research chair (CRC) in the Study of the Canadian North, Trent University’s Dr. Whitney Lackenbauer organized the full-day event on October 22 to honour the legacy of Shelagh Grant, an internationally renowned expert on the Arctic and an award-winning author, and to celebrate the 50th Anniversary of Canadian Studies at Trent.

“It is truly remarkable to have this calibre of scholars—this body of knowledge—all in one room,” said Professor Lackenbauer. “This group of scholars brings together tremendous academic knowledge as well as the lived experience of people who were present at the birth of the Arctic Council, who have led the Inuit Circumpolar Council, people who were raised in northern communities, and who have advocated for the rights of northern Indigenous people. It’s a testament to Shelagh Grant’s contribution to Trent and to the study of Canada’s North that we’re able to host an event like this.”

The conference, titled Northern Nationalisms, Arctic Mythologies, and the Weight of History: A Conference in Memory of Shelagh Grant, is a highlight in the School for the Study of Canada’s ongoing celebration of 50 years of Canadian scholarship at Trent. This milestone is being marked by a series of events that see Trent hosting renowned scholars from around the world to lead critical discussions on the topic of Canada. Through his CRC position, Professor Lackenbauer leads a research team exploring Canada’s sovereignty, security and stewardship responsibilities to the North. His research aims to protect national interests and values, promote sustainable development and healthy communities, and facilitate circumpolar stability and cooperation.

Many of the scholars and practitioners who attended the conference were instrumental in creating the Arctic Council and shaping the relationships that have held to this day. Their presence at Trent offers unique insights on the recent challenges presented by Russia’s invasion of Ukraine, as well as Finland and Sweden joining NATO, placing those challenges into a larger historical context only they can offer. Her Excellency delivered the keynote address at the conference, speaking extensively of her relationship with Dr. Grant, their work together, and calling upon the next generation of researchers in attendance to drive forward conversations surrounding the Arctic.

“Here in this room is Shelagh’s legacy. You are contemporaries of Shelagh’s. And you are newcomers to this field of study. A new generation, a new type of Arctic explorer, focusing on preserving the Arctic and promoting new opportunities in Canada’s North,” said Governor General Simon in her address. “Trent University is a good place for these conversations. Here, we find the Chanie Wenjack School for Indigenous Studies, as well as the opportunity for in field work and hands-on Arctic research with the Indigenous and Environmental Studies and Sciences program.” The Governor General and former Trent University chancellor, a renowned advocate for Inuit rights, youth, education and culture, former president of the Inuit Circumpolar Conference (ICC), and Canada’s first circumpolar ambassador (1994-2004), was among many notable Indigenous scholars in attendance. At the conference she was joined by Professor David Newhouse, chair of the Chanie Wenjack School for Indigenous Studies at Trent, and Rosemarie Kuptana, former president of the ICC and highly influential in the creation of the Arctic Council.

Dr. Shelagh Grant, an internationally renowned expert on the Arctic and an award-winning author, passed away in 2020. She was a Trent University alumna, a professor in Canadian Studies at Trent for 17 years, a former research associate at Trent’s School for the Study of Canada, and an honorary degree recipient. Her most notable contribution to Canada, perhaps, was through her award-winning writing. Expanding her Trent master’s thesis, Dr. Grant wrote her first book, Sovereignty or Security? Government Policy in the Canadian North. Other esteemed works include Arctic Justice – On Trial for Murder Pond Inlet 1923, for which she received the CHA Clio Prize for Northern History and 2011’s Polar imperative: A history of Arctic sovereignty in North America

In 1972, Trent established the first ever program in Canadian Studies for the purpose of critically examining the Canadian experience. The University is also home to Canada’s only M.A. in Canadian Studies and Indigenous Studies. Launched in 2015, the School for the Study of Canada is the place to have meaningful and challenging discussions about what it means to be Canadian. Visit the Canadian Studies 50th Anniversary website for details and events.