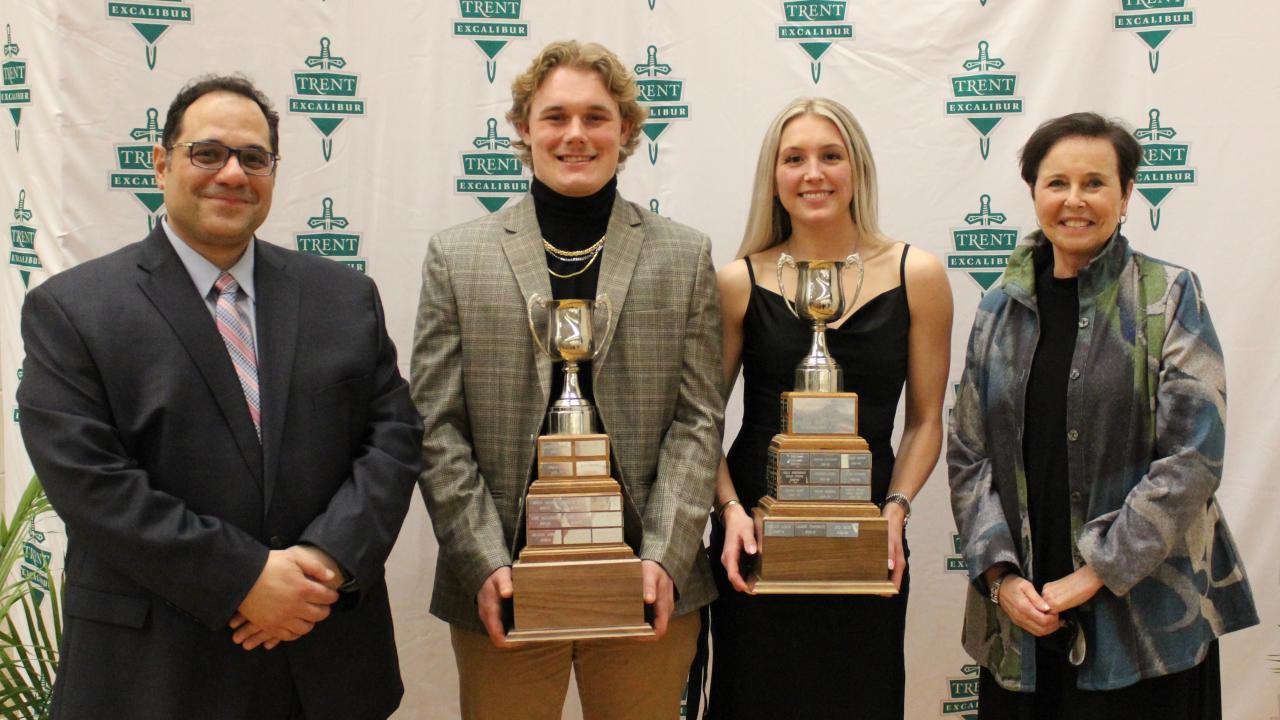 Trent University student-athletes, coaches, staff, and special guests came together to celebrate the accomplishments of the season and showcase what it means to be part of the One Excalibur Family during the 53rd annual Athletics Awards held at the Trent Athletics Centre on March 24, 2022.

“Coming together in-person for the 53rd Trent Excalibur Awards gives us an opportunity to celebrate the return to sport this year, highlight the accomplishments of our varsity student-athletes and coaches, and recognize all their hard work in representing the Trent Excalibur,” said Dr. Leo Groarke, president and vice-chancellor of Trent. “The entire Trent community has been excited to see our green and white Excalibur student-athletes back on the field, water, court, and ice this season as One Excalibur.”

Varsity student-athletes Victoria Clark (women’s lacrosse) and Alex Zajac (men’s rugby) were honoured as the recipients of the Arthur Cup, the University’s most prestigious award presented to graduating students who have demonstrated outstanding contribution, sportsmanship, participation, and leadership in athletics programs.

Over the past four seasons with the Excalibur women’s lacrosse team, Victoria Clark (Otonabee-South Monaghan, ON) has proven a dedicated leader with the Trent Excalibur, both on the field and in the classroom. The Biomedical Science student played a key role in continuing the winning culture of the Excalibur women’s lacrosse team, fostering a positive team environment while supporting the development of the team’s skills and abilities.

During her time with the Excalibur, Victoria (Otonabee College) was a member of two-time OUA champion women’s lacrosse teams in 2019 and 2021, also helping the team earn the OUA bronze medal in 2018. Her accomplishments during her time with the Trent Excalibur include being named Rookie of the Year, recipient of two OUA All-Star awards, as well as serving as team captain in her final two seasons.

Alex Zajac (Otonabee-South Monaghan, ON) of the men’s rugby team has shown tremendous growth as a student-athlete on and off the field. Named captain in his final year, Alex (Champlain College) began as the team’s Rookie of the Year in 2018 and has always been a leader in welcoming incoming student-athletes, supporting his teammates on and off the field. His positive attitude and calm demeanour have allowed him to lead by example and promoted a winning culture among the Excalibur Rugby program.

On the field, Alex played a key role in the men’s 2019 OUA Bronze medal game, leading the charge of a young team. Off the field, he balanced academics, athletics, and work, maintaining strong connections in all aspects, as well as continuing to volunteer in the Peterborough community.

“This year, Trent Athletics has seen the continued dedication, resilience, and unity of the One Excalibur student-athletes, coaches, and staff,” said Deborah Bright-Brundle, director of Trent Athletics & Recreation. “We are celebrating not only the award recipients and achievements from this past season but we also commemorate the perseverance and growth of the One Excalibur family through this past season. It is with great pleasure and honour to be able to come together in person once again as we celebrate our team awards and major awards and we celebrate being part of the OneExcalibur Family.”

With their leadership on and off the court throughout their time as a Trent Excalibur, varsity women’s volleyball student-athlete Brooke Driscoll (Selwyn, ON) was awarded the Gary Wolff Leadership award, presented each year to a student-athlete who has demonstrated determination and leadership through balancing sport, community involvement and academic performance. Brooke (Champlain College) has been a contributing member of the women’s volleyball team for the past five seasons, serving as the co-captain during the 2021-22 season. Brooke’s commitment to sport was recognized by the OUA this past season, presented with the Award of Merit.

As a high-performing student-athlete, Brooke was also awarded the Academic All-Canadian Award in each of their years at Trent, studying Archaeology in their undergraduate degree. They are now completing their Master of Arts in Anthropology. In the community, Brooke has organized the Excalibur women’s volleyball’s Polar Plunge Fundraiser, raising money for the BEL Rotary Club and continuedsto give back to the community as a youth coach for the Invado Volleyball Club and Soul Beach Volleyball.

This year, Women’s Rugby student-athlete, Alexa Vanderhorst (Norwood, ON) was the recipient of the Community Betterment Award. During her four years with the Excalibur, Alexa (Gzowski College) was the community liaison for Trent Rugby in 2021, Trent Rugby’s fast & female ambassador in 2019, a volunteer firefighter with Asphodel-Norwood Fire Department, and a member of Trent University Durham’s PLCW Care Student group (helping those who are less fortunate through food and clothing drives). She was also named the OUA Russel Division All-Star this season. As a student-athlete, she uses her platform and knowledge of sport to continue to help younger athletes as a volunteer figure skating coach and wrestling coach.

For their achievements over the 2020/2021 academic year, 119 Trent Excalibur student-athletes were acknowledged for achieving academic honours by maintaining an 80 percent or higher average, while playing in their respective varsity sport.

In addition, the following student-athletes were honoured with the University Athletic Award, presented to students who have demonstrated a significant contribution to the varsity and campus recreation programs:

The following varsity student-athletes were also honoured for outstanding commitment and dedication to their respective sports: