Project Spotlight: The Fenians are Coming! 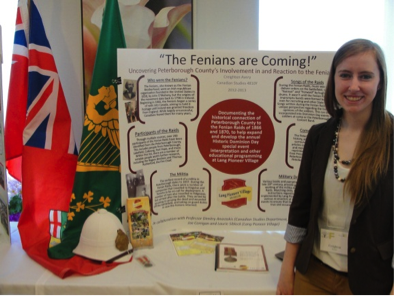 The project: In the past few years, Lang Pioneer Village has showcased historical re-enactments of Fenian raids which occurred in the mid 1800’s. However, they realized that their historical work could use more background research, particularly in making connections to local people. Having had two earlier very successful experiences with our CBE program, they approached the TCCBE again with this new project idea. Creighton Avery, a fourth-year archaeology student was drawn to the project because of her own Irish ancestry.

Creighton’s project aimed to document a historical timeline of the raids, a list of the local militia companies which existed in Peterborough County, a summary of the deployment of the local militia groups, identification if individual participation in the raids by local citizens, the response of the Peterborough Irish community to the Fenian invaders, and the identification of specific drill instructions for 1860’s to 1870’s Canadian Militia.

Research question: What was the historical connection of the Peterborough area militia units to the Fenian Raids of 1866 to 1870?

Methods: Creighton used archives and historical records to identify individuals who had participated in the Fenian Raids, as well as additional information about militia procedures in Canada during the 1860’s and 1870’s. She also used newspapers published during the time period from the Trent Valley Archives to research the response of the Peterborough community to the raids.

Findings: Creighton was able to produce an impressive list of local people connected to the Raids that Lang visitors will be able to use for finding family relatives, as well as provide additional information for Lang Pioneer Village to use as part of their annual Historic Dominion Day special event interpretation and other education programming.

Impacts: Overseen by Dr. Dimitry Anastakis, in the Trent University Canadian Studies department, Creighton showed herself to be extremely dedicated and thorough in her work at local archives and her research uncovered some significant new information, including making many connections to local personalities of the time.

Most satisfying of all was to see Creighton flourish during the project. She commented in her evaluation that “I originally saw it as a filler course, and a way to get experience…I didn’t think it would influence my career decisions. However, after completing this project, I’m leaning towards historic archaeology, so I can use archives and other documents to supplement archaeological finds.”

For her efforts, Creighton was awarded the Innovative Presentation Award at the 2013 Community Innovation Forum.