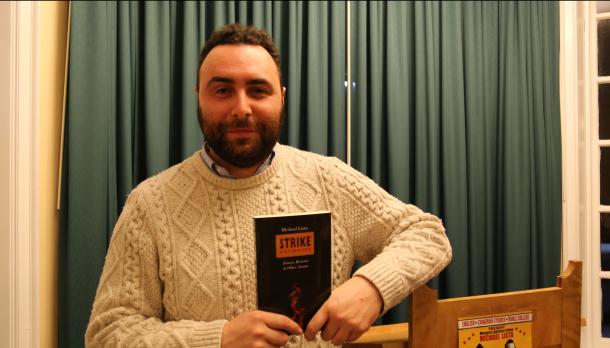 He’s been a book columnist and noted poet and during his visit at Trent University last week, Michael Lista was ready to defend his craft – and the literary left – particularly at a time when the political elite seems on the verge of stepping into the ring at the slightest comment.

On February 9, 2017, speaking to a crowd at Traill College’s Bagnani Hall, he shared his own experiences in writing both ahead of, and following the U.S. election.

Throughout his address, Mr. Lista painted a picture of struggles facing literary writers who have, by and large, been described as left leaning. Now, he suggests, they are under fire much in the way they held the right to the fire for so long. He says, “It has resulted in a new, drawn-out battle, pitting literary writers against one another. It’s taken the focus, to some extent, off those who would normally be the target of the writers.”

This year, Mr. Lista has been named writer-in-residence, filling a fellowship established in 1988 as a tribute to and in memory of Margaret Laurence, Trent University’s fourth chancellor. It is co-administered by Department of English Literature and Canadian Studies Program and brings promising writers who are in the early stages of their careers to Trent University.

Mr. Lista has worked as a book columnist for the National Post, and as the poetry editor of The Walrus. He is also the author of three books and his essays and investigative stories have appeared in The Atlantic, Slate, Toronto Life, Canadaland, and numerous other publications.

Kate Taylor, an English major at Trent, says she was compelled to take in the address after Mr. Lista spoke to her advanced creative writing class earlier in the day. “It’s very interesting to hear a writer read their own work and describe the process and annotations they give to their own work that you don’t get when you read it on a website,” she says.