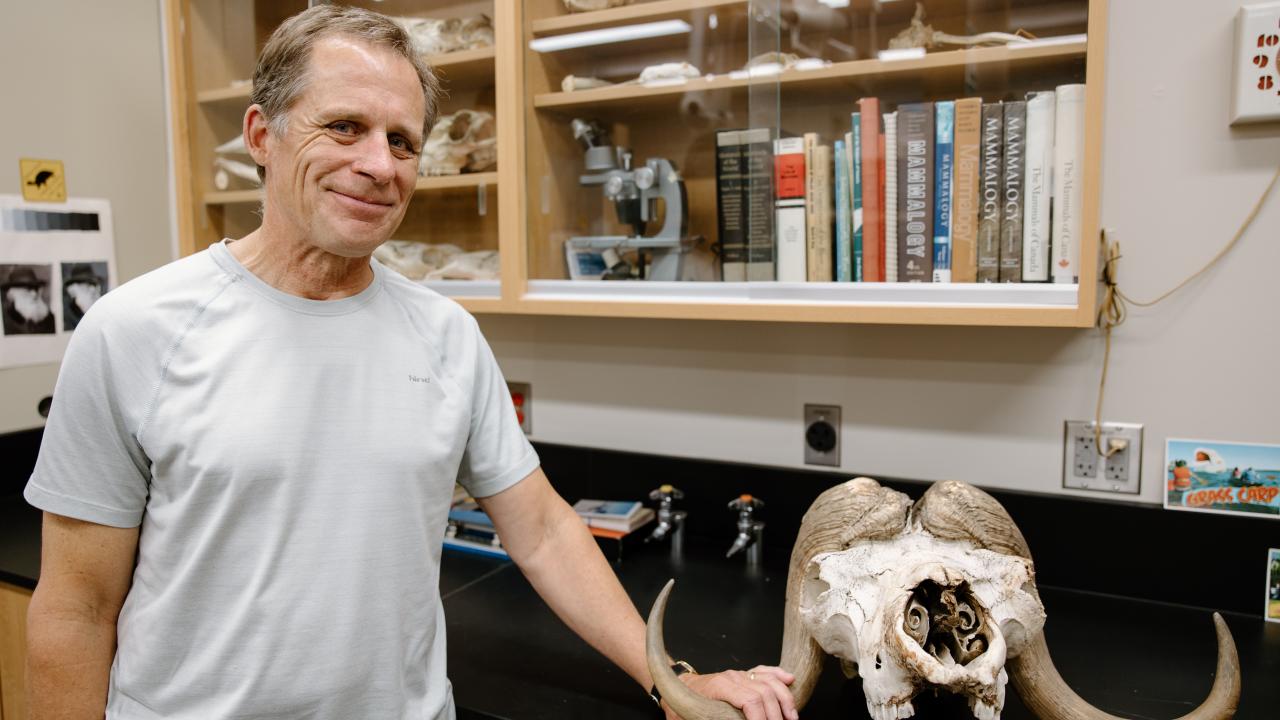 Trent biology professor, Dr. Jim Schaefer, had wanted to travel to the Arctic since he was a teenager, but it wasn’t until his PhD studies that he finally made it above treeline. In the early 1990s, he travelled 3000 km northwest of Trent University to Victoria Island, and in particular a place called Ekalluktok, to study a relic of the Ice Age: the muskox. It’s a place the Inuit have inhabited for centuries, in part because of the abundance of muskoxen. Professor Schaefer spent 15 months (over the course of three years) studying habitat selection and behaviour of muskoxen. This was unusual at the time, because he carried out fieldwork not only in summer but winter as well. Since snow is the most important ecological feature of the north, he figured he ought to be there to study it.

“The Arctic is some of the last true wilderness of its kind on the planet. It's above tree line, which means that you can see forever. And I lived in that environment. It was my home for those months that I was in the field. And I saw muskoxen virtually every day.”

To get food during the 8 months of winter, muskoxen are required to do what’s called cratering: breaking through the snow cover to get the sedges and grasses below. But Arctic snow isn’t like southern snow; it’s worked and reworked constantly by the wind and the result is that it can look and feel like concrete; you can walk on it with barely leaving a footprint. So that means muskoxen have to invest a great deal of precious energy to break through this frozen barrier with their hooves and sometimes their chins to get food. Not surprisingly, they are selective about where they feed.

As an ecologist, Prof. Schaefer was interested in the vegetation and its relationship to snow cover. He was measuring where muskoxen were travelling and where they were feeding, but he also needed to get a sense of their food and its availability in the general environment. To do that he set up two long lines (transects about six kilometres long) using aluminum stakes set in the ground, each 200 metres apart. Since this was in pre-GPS times, he and his team used maps and a 100-metre measuring tape to set out the stakes. When finished, he had 80 stakes to use as a permanent reference for measuring snow cover and vegetation. He went back repeatedly to take those measurements in October and November, and again in April, May and June. In the Arctic, those months represent early and late winter. Critically, when he finished this study in 1993, he asked the regional biologist if he should remove the stakes and she said, no, he could leave them out there. That small decision has allowed Prof. Schaefer to return to Ekalluktok (in 2019, then again, this past year) and perform a longitudinal study using the same stakes he installed 30 years before.

“We were very particular with these stakes. My assistant, Scott Stephens and I laid these out in August, and we went back in November to measure snow. And we knew they were 200 metres apart. So we easily found the first, second, third, fourth, fifth, sixth, seventh, eighth, but we could not find the ninth one. We went back to the eighth—and there's the tenth—we couldn't find the ninth stake. Okay. Scott and I pulled out the 100-meter tape again—measured twice—the stake must be there. I drove the shovel into the snow and I hit the stake. So we were pretty precise. And 3 decades later, I was confident in being able to find them again.”

Prof. Schaefer expected to find evidence of shrubification—a change in vegetation consistent with climate change—where one sees an increase in cover and height of shrubs that is characteristic of areas further south. Consistent with climate change, he did find that the permafrost (permanently frozen ground) now was 10 cm deeper in the soil. A significant finding but, as yet, he hasn’t uncovered evidence of more shrub cover. However, since the permafrost determines the height of the water table, he did find that mountain avens (a small shrub with shallow roots and an important food for caribou) had declined by about 40%, likely due to its inability to gather enough water due to the lowered water table. He also found that grasses and sedges had increased by about 20%. “That's consistent with what I've heard from the Inuit; the elders are saying that the landscape looks ‘greener’ than it used to. So with a warmer, wetter environment that makes some sense.”

Prof. Schaefer brought Trent biology student, Josh Russell, on his latest trip to Ekalluktok to help collect the data that will provide a long-term perspective on how habitats are changing in the Arctic. “One of the things we must do as Northern ecologists and conservation biologists is make sure that we train a new generation of biologists that have northern experience. During our fieldwork, Josh and I lived on the land. Although those field skills are often discounted in the south, they're absolutely essential. The Arctic is a beautiful environment, but every trip is a survival trip.”  Josh will not only measure vegetation in detail but later this winter he will repeat the original measurements of snow cover. By studying ecology in exactly the same place using exactly the same techniques, decades apart, they will be able to look across time to detect changes to this important ecosystem.  “His will be a very good Honours thesis, in part because even though this study is short, these are long term data. With just a few weeks really of effort, we have a long-term perspective on what's going on. And so I like the return on investment, if you want to call it that—I told Josh: who would have guessed he started his Honours thesis in 1991?”