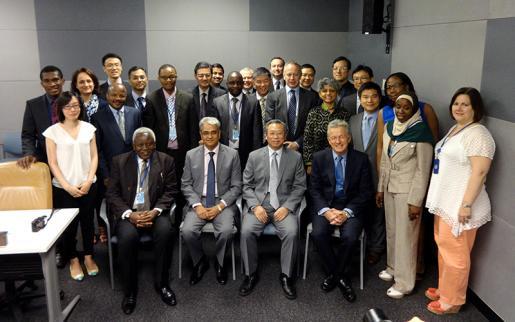 With a year to go in his graduate studies and his dream job already waiting for him as he steps off the podium at Trent, Bex Williams is an example of focus and drive.

Just weeks after returning from a competitive summer internship with the United Nations’ auditing department, Bex Williams, a masters student in Trent’s Applied Modelling and Quantitative Methods program, was head-hunted by all the top international accounting firms, finally settling on a position at KMPG, once he has completed his degree in summer of 2015.

While the U.N. internship played a major role in his securing his position with KPMG, Mr. Williams also credits his extra-curricular activities at Trent with helping him to build the social skills necessary to perform well in high pressure organizations.

Originally hailing from St. Vincent and the Grenadines, Mr. Williams did his undergrad in Economics at the University of West Indies, Barbados before coming to Trent. While at Trent he immersed himself in extra-curricular activities both on campus and in the community including Unicef Trent, the Red Cross, the New Canadians Centre, as well as becoming vice-president of finance for the Trent Graduate Student Association. “I try to keep myself busy,” he laughs.

“The United Nations has always been an interest of mine because I’ve always been involved in extra-curricular social projects like that,” explains Mr. Williams. “At the U.N. I got the exposure to review and management audit reports which is critical to my career aspirations,” he says.

But for Mr. Williams, those aspirations have now become reality. Having just received the good news the day prior, Mr. Williams was ready to celebrate. His first stop? The Career Centre. “The Career Centre at Trent has been instrumental in helping me to get my resume ready and to prepare for job interviews” explains Mr. Williams. “I want to particularly mention Charmaine Rodrick at the Career Centre who took the time and effort to help me along the journey. From resume critique and cover letter reviews to interview preps. She was always there to give advice and support. I really couldn't have done this without her support,” he adds. “Us students, we often forget these resources and we wait until the last minute when it’s a bit too late.  My story is an example where planning ahead really helps.”

In celebration of Canada Career Week (November 4-7) we are sharing a new story every day from our students, our alumni and our University’s leaders on how Trent best prepares our students and graduates for success in their chosen careers.